Superhuman By Habit is a short book that serves as a tactical guide to building good habits and dropping bad habits.

Book Title: Superhuman By Habit: A Guide to Becoming the Best Possible Version of Yourself, One Tiny Habit at a Time
Author: Tynan
Date of Reading: July 2017
Rating: 8/10

Superhuman By Habit is quite a short book, only 80 pages long, and it can be divide into three sections.

The first part, Building Habits, talks about the principles and philosophies behind habits and why they are crucial for success in life.

The second part, Choosing Habits, talks about motivation behind building a good habit and the real-life application of habits.

The third part, Practical Analysis Of Various Habits, is dedicated to specific habits: the path to implementing them daily, the pros and cons of each it, and how Tynan built all of them through the years.

“Rather than making me feel like a robot running through routines, building habits has made so much of my life automatic that it feels like I have complete autonomy because I don’t have to worry about the basics. They get done in the background.”

“This is the engine that drives the people we most admire:those people who consistently seem to excel at their work, stay healthy, stay connected to those around them, and do all of this while remaining calm and happy.”

“A bank account as a metaphor. Those who build habits are like people who live below their means, slowly building up an impressive balance in their bank account. When expenses come up or their situation changes, they’re able to cope with it effortlessly by accessing the past deposits (and interest) in their account.” 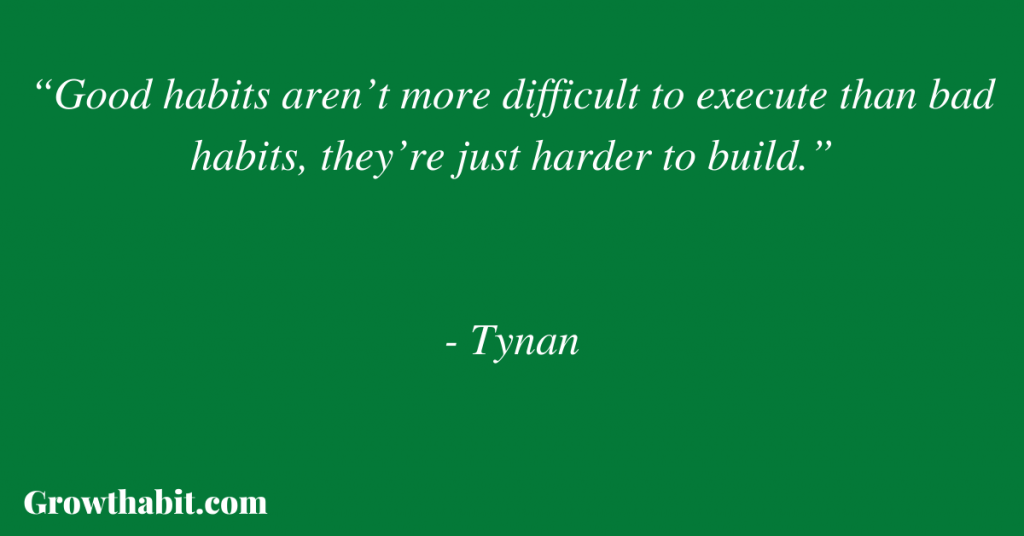 “By creating habits, we can move things from the “hard” category to the “easy” category, thus freeing up willpower to tackle more of the hard things. We don’t give ourselves the ability to accomplish more by sacrificing health and sanity, which causes burnout, but rather by making some of those hard things easy.”

“Well, for six months of focused effort I now get fifty years or so of loving to work and the enjoyment of the dividends it pays.”

“Each new habit strains our willpower, which means that there are a limited number of new habits that we can have at any given time. Old habits, being automatic and subconscious, can be unlimited. So, the ultimate process for self-improvement is to add as many new positive habits as possible, working diligently to convert them to old habits and make room for more new habits.”

“Missing two days of a habit is habit suicide. If missing one day reduces your chances of long-term success by a small amount like five percent, missing two days reduces it by forty percent or so. Three days missed and you may as well be starting over. At that point you have lost your momentum and have made it far too easy for you to skip in the future.”

“So what do you do when you’ve promised yourself that you’ll write five hundred words every single day, but you’re sick, tired, busy, and can’t think of a single thing to write about? Just do a terrible job. Write about how bad you feel or about how you don’t want to write. If you can’t muster the willpower to do either of those things, just write five hundred random words.”

“The difficulty of the habit in question is far less important than how much it means to you.”

“I came to understand that people we think of as exceptional aren’t that way because of who they are, but because of what they do. In every single case they had a set of habits that led them to the top of their fields. In most cases their natural proclivities created those habits for them, but I’ve also seen plenty of examples of people systematically rewiring their habits to orient themselves for success.”

“You can do just about anything if you break it down into habits and execute on them. That’s not to say that it’s easy, only that it’s possible.”

“As an extreme example, when I wanted to date more, with the first step being going out and talking to more girls, I made a list of six things I was allowed to do (work, eat, sleep, read after midnight, play violin, talk to girls), intentionally making it so that talking to girls was the most fun thing I was allowed to do. Through subtracting I got myself to add.”

“You’ll get the greatest compliance by maximizing frequency and minimizing intensity.”

“I’ve written every day for the past six months or so, so if I didn’t write today, something would feel wrong, just as if I forgot to brush my teeth.”

“If you need five hours to clean but only have two, you have to skip. If you need thirty minutes but don’t feel like spending that time, you can convince yourself to suck it up and be a champion.”

“One particularly valuable habit in this regard is reading every single day. You will consume so many books that you’re bound to run into some that contradict your beliefs and occasionally run into one that changes your perception in an instant and births a new lifelong habit.”

“The three main disruptive habits are the use of drugs, the seeking of stimulation, and the habit of hanging out with negative friends.”

“Replacing French fries with plain kale will be tough, but replacing them with baked sweet potatoes is pretty easy.”

“It’s easy to have willpower when a beautiful spread of healthy food is laid out in front of you, but it’s a lot harder when every option readily available to you is full of sugar or white flour, and you’d have to go to great lengths to get something decent.” 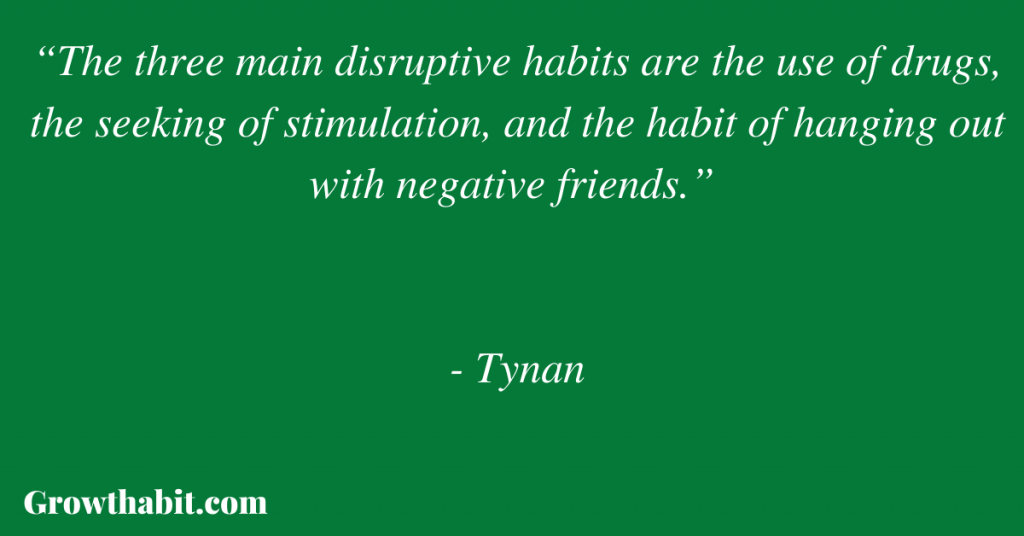 “Once per week, two weeks, or month, make the time to go see masterpieces. A masterpiece is anything made by someone who is an expert in their craft. Obvious choices are art museums, symphony performances, and operas, but I’d extend the category to include stuff like factory tours of impressive companies.”

“Tracking the time I started key bits of work every day, I could effortlessly cut out the procrastination that usually preceded them, I began to look for other habits that would work because of the “what gets measured gets managed” principle. One of the most effective was also the most simple: rating each day made my days better.”

“Every night, before you go to bed, rate your day on a scale from one to ten. I recommend that you rate yourself on how little time you wasted, rather than on raw productivity or output.”

I’ve read quite a lot of books on building habits and, besides Atomic Habits, I would say this is a must-read. First of all, Tynan shows us how he built the habits he talks about in the book. So you have the personal example of how the author did it and that’s why he can guide you on this hard, but satisfying path.

Here’s Tynan having a discussion about the book on a podcast.
Optimize Interview

There are a lot of gems in this book, but the one thing I really got is resetting the counter. What this means is that if I skip a habit three times in a row, I have to start the counter from zero again. That’s why I never missed my reading habit by more than one time.

You do what you measure. So if you want to start a new habit, start tracking it. Oh, and you can use our free habit tracker to do that.