What is the book about as a whole:

How can you make the easiest possible changes in your life by breaking bad habits and establishing good habits, bringing remarkable results.

What is being said in detail:

The book presents a system that helps you eradicate your bad habits and establish good habits.

The process of building a habit is divided into four simple steps: Cue, Craving, Response, and Reward.

The Cue triggers your brain to initiate a behavior.

Cravings are a motivational force behind every habit. If there’s no craving, there’s no reason to act.

The Response is the actual habit you perform (thought or action).

The response delivers a Reward. Rewards are the end goals of the habits. The rewards either satisfy (fulfill craving) or teach us (remember and repeat this action for the future).

You need all four to create a habit loop (never-ending loop):

The system for creating good habits has four laws (components) to it:

The inverse laws apply if we want to get rid of bad habits:

Clear makes sure to provide stories and examples that help with every step of the way. Also, there are some principles that you can easily implement in your daily life such as:

Action, on the other hand, is the type of behavior that will deliver an outcome. If I outline twenty ideas for articles I want to write, that’s motion. If I actually sit down and write an article, that’s action.

If you want to master a habit, the key is to start with repetition, not perfection.

…an important truth about behavior change: habits form based on frequency, not time.

We are motivated to do what is easy.

But perhaps the best way to measure your progress is with a habit tracker.

The most effective form of motivation is progress.

The first mistake is never the one that ruins you. It is the spiral of repeated mistakes that follows. Missing once is an accident. Missing twice is the start of a new habit. 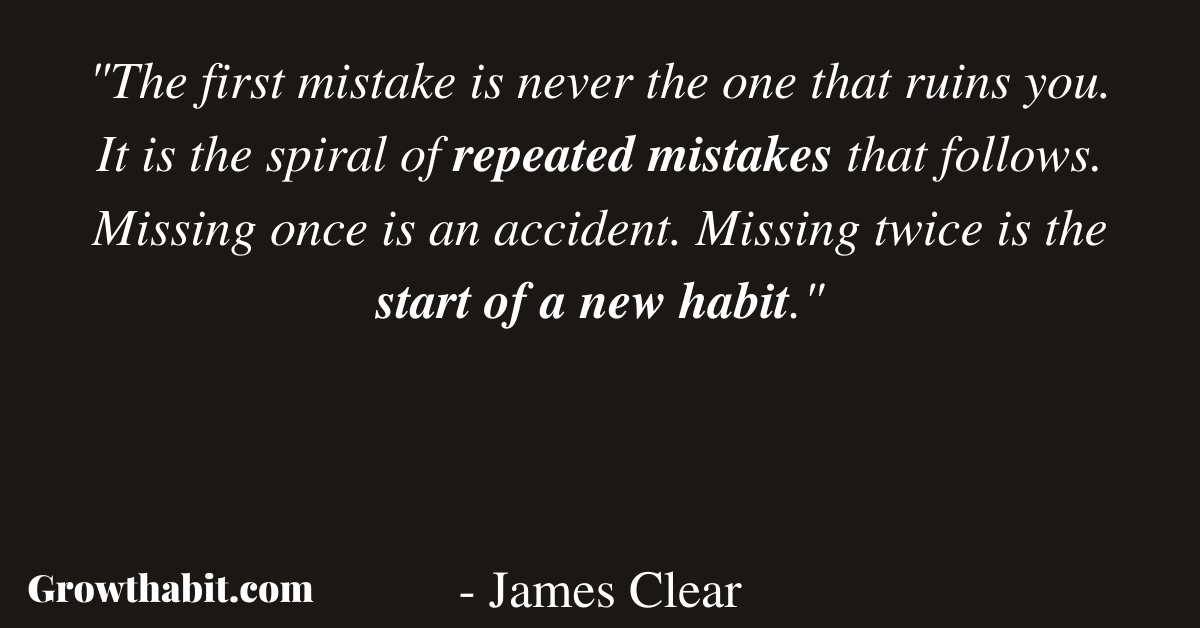 Goodhart’s Law. Named after the economist Charles Goodhart, the principle states, “When a measure becomes a target, it ceases to be a good measure.” Measurement is only useful when it guides you and adds context to a larger picture, not when it consumes you. Each number is simply one piece of feedback in the overall system.

Choose the habit that best suits you, not the one that is most popular. When you can’t win by being better, you can win by being different.

Boiling water will soften a potato but harden an egg. You can’t control whether you’re a potato or an egg, but you can decide to play a game where it’s better to be hard or soft. If you can find a more favorable environment, you can transform the situation from one where the odds are against you to one where they are in your favor.

In summary, one of the best ways to ensure your habits remain satisfying over the long-run is to pick behaviors that align with your personality and skills. Work hard on the things that come easy.

The greatest threat to success is not failure but boredom.

The only way to become excellent is to be endlessly fascinated by doing the same thing over and over. You have to fall in love with boredom.

It’s an incredible book, simple in its design and structure, but effective. The stories and real-life examples put the book into an “operations manual” instead of an “armchair philosophy” type of book. You can take the fairly simple system and implement it two-ways: creating good habits and eliminating bad habits.

This book is for (recommend):

If you want to learn more

Here’s a video of James Clear talking about becoming 1% better every day at a ConvertKit conference.

How I’ve implemented the ideas from the book

I implemented quite a lot from this book, but my favorite thing was eliminating some of my bad habits from the environment. I don’t have a TV in my apartment and I’m not planning to buy one.

I realized that I used to sit on a couch and just watch TV in an automated mode. But if I don’t have a TV, I can do something productive instead. So I read books or write articles instead of watching Friends for the 8th time.

One small actionable step you can do

Start a habit using the two-minute rule: Implement a habit that only takes two minutes to do. Some examples might be:

Get Atomic Habits on Amazon