How to use the Hook model (Trigger, Action, Variable Reward, Investment) to achieve widespread attention and engagement for your product.

Hooked covers a model on how to build habit-forming products.

The book has a 6 part structure:

Triggers focus on building internal and external triggers to start a routine (habit). Some of the questions that help out here are:

The action part focuses on the user/customer doing the behavior/routine. Some of the questions that help out here are:

The variable reward part focuses on providing different and unexpected rewards to the user so they continue using the product. A question that helps out here is:

The investment part focuses on attaining enough input from the user whether it’s in time, money, data, or social currency so they use the product over and over again. Some of the questions that help out here are:

The last part of the book talks a bit about the morality of using this model to affect user behavior. The author describes a 2×2 matrix titled Manipulation Matrix:

The author leaves us with a question to think about where we are in the Manipulation Matrix and to understand how we feel about influencing the behavior of other people.

Following the trigger comes the action: the behavior done in anticipation of a reward.

Companies leverage two basic pulleys of human behavior to increase the likelihood of an action occurring: the ease of performing an action and the psychological motivation to do it.

Feedback loops are all around us, but predictable ones don’t create desire. The unsurprising response of your fridge light turning on when you open the door doesn’t drive you to keep opening it again and again. However, add some variability to the mix—suppose a different treat magically appears in your fridge every time you open it—and voilŕ, intrigue is created. 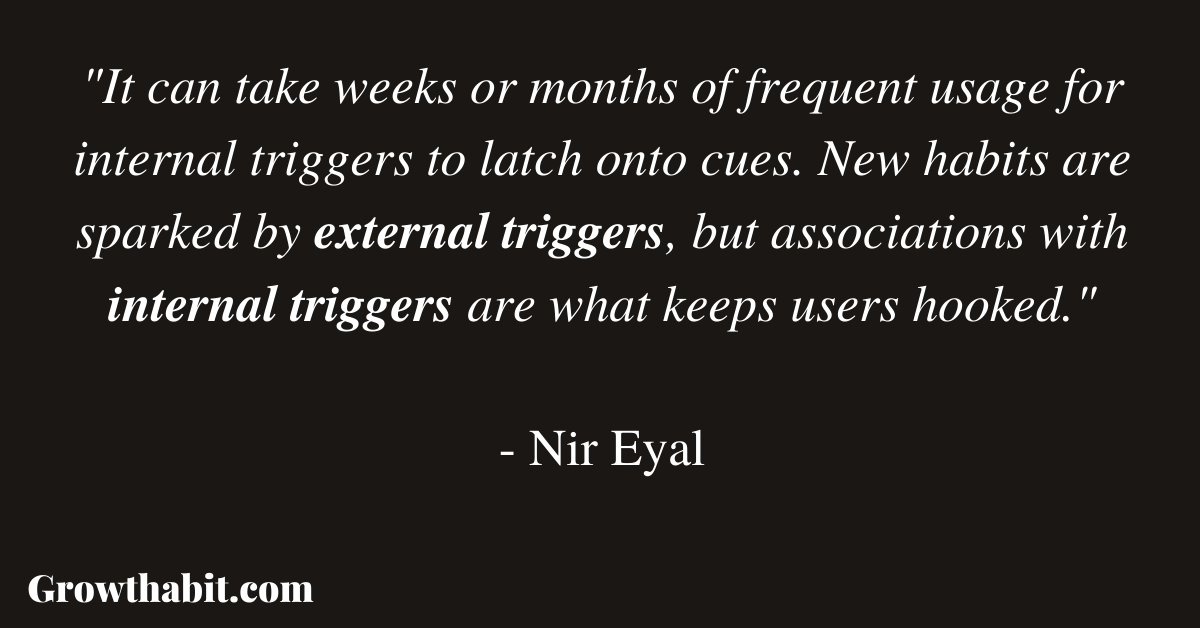 The last phase of the Hook Model is where the user does a bit of work. The investment phase increases the odds that the user will make another pass through the Hook cycle in the future. The investment occurs when the user puts something into the product of service such as time, data, effort, social capital, or money.

“If it can’t be used for evil, it’s not a superpower.” He’s right. And under this definition, building habit-forming products is indeed a superpower.

Ultimately, though, the practice should be “used to help nudge people to make better choices (as judged by themselves).”

Habit-forming products change user behavior and create unprompted user engagement. The aim is to influence customers to use your product on their own, again and again, without relying on overt calls to action such as ads or promotions.

In addition, as usage increased over time, so did customers’ willingness to pay. Libin noted that after the first month, only 0.5 percent of users paid for the service; however, this rate gradually increased. By month thirty-three, 11 percent of users had started paying. At month forty-two, a remarkable 26 percent of customers were paying for something they had previously used for free.

Like flossing, frequent engagement with a product— especially over a short period of time—increases the likelihood of forming new routines.

Sometimes a behavior does not occur as frequently as flossing or Googling, but it still becomes a habit. For an infrequent action to become a habit, the user must perceive a high degree of utility, either from gaining pleasure or avoiding pain. (Amazon shopping)

A company can begin to determine its product’s habit-forming potential by plotting two factors: frequency (how often the behavior occurs) and perceived utility (how useful and rewarding the behavior is in the user’s mind over alternative solutions).

External triggers are embedded with information, which tells the user what to do next.

The only purpose for these common visual triggers is to prompt the user to action. As a readily accepted aspect of interface design, these calls to action don’t need to tell people how to use them; the information is embedded.

To initiate action, doing must be easier than thinking. Remember, a habit is a behavior done with little or no conscious thought.

Fogg posits that there are three ingredients required to initiate any and all behaviors: (1) the user must have sufficient motivation; (2) the user must have the ability to complete the desired action; and (3) a trigger must be present to activate the behavior.

While internal triggers are the frequent, everyday itch experienced by users, the right motivators create action by offering the promise of desirable outcomes (i.e., a satisfying scratch).

Evan Williams, cofounder of Blogger and Twitter, echoes Hauptly’s formula for innovation when he describes his own approach to building two massively successful companies:

“Take a human desire, preferably one that has been around for a really long time . . . Identify that desire and use modern technology to take out steps.”

Influencing behavior by reducing the effort required to perform an action is more effective than increasing someone’s desire to do it. Make your product so simple that users already know how to use it, and you’ve got a winner.

The mind takes shortcuts informed by our surroundings to make quick and sometimes erroneous judgments.

The study revealed that what draws us to act is not the sensation we receive from the reward itself, but the need to alleviate the craving for that reward.

Without variability we are like children in that once we figure out what will happen next, we become less excited by the experience.

The rewards of the self are fueled by “intrinsic motivation” as highlighted by the work of Edward Deci and Richard Ryan. Their self-determination theory espouses that people desire, among other things, to gain a sense of competency. Adding an element of mystery to this goal makes the pursuit all the more enticing.

When there is a mismatch between the customer’s problem and the company’s assumed solution, no amount of gamification will help spur engagement.

Companies that successfully change behaviors present users with an implicit choice between their old way of doing things and a new, more convenient way to fulfill existing needs. By maintaining the users’ freedom to choose, products can facilitate the adoption of new habits and change behavior for good.

In a phenomenon termed experience-taking, researchers have shown that people who read a story about a character actually feel what the protagonist is feeling.

The more users invest time and effort into a product or service, the more they value it. In fact, there is ample evidence to suggest that our labor leads to love.

Maybe you felt a bit unsettled reading what seemed like a cookbook for mind control. If so, that is a very good thing.

Chris Nodder, author of the book Evil by Design, writes, “It’s OK to deceive people if it’s in their best interests, or if they’ve given implicit consent to be deceived as part of a persuasive strategy.”

When you create something that you would use, that you believe makes the user’s life better, you are facilitating a healthy habit. It is important to note that only you can decide if you would actually use the product or service, and what “materially improving the life of the user” really means in light of what you are creating.

Creating a product that the designer does not believe improves users’ lives and that he himself would not use is called exploitation.

Through my studies and discussions with entrepreneurs at today’s most successful habit-forming companies, I’ve distilled this process into what I term Habit Testing. It is a process inspired by the “build, measure, learn” methodology championed by the lean start-up movement.

If there’s one thing I can soundly say I know a lot about, it’s habits. But to come to that point, I had to both experiment to learn from my experiences and read what the great minds told about habits and habit building. Enter Hooked by Nir Eyal. I had to read about habits syntopically to fill my blanks about the topic and make sure I don’t miss anything big. This book is more based on making your (B2C) product aligned with the habit loop and is not as good as other habit books I reviewed.

Here is Nir’s speech on the book’s topic.
NirAndFar

The rewards were aligned with the accomplishment but they were never the same. I planned some months ahead (road trips and dinners) while I got the idea for others just days prior (taking a 40-kilometer walk on a Saturday morning to visit my friend in a different city).

Look at the habit you’re trying to build up at the moment, analyze what you miss from the Hook model, and add it up to your habit routine.