True Believer by Eric Hoffer is a book about the true nature of mass movements and groups. If you want to learn how people act in groups and why they act like that, you should definitely read this book (summary).

True Believer is a fascinating book that depicts individual behavior inside of a group better than any other book. The book has four parts:

“All mass movements generate in their adherents a readiness to die and a proclivity for united action; all of them, effectiveness of Communist, Nazi and nationalist doctrine die basically for the same thing.”

Part 1 – The Appeal Of Mass Movements

“Those who are awed by their surroundings do not think of change, no matter how miserable their condition.”

“It is a dangerous life we live when hunger and cold are at our heels.”

“Even the sober desire for progress is sustained by faith—faith in the intrinsic goodness of human nature and in the omnipotence of science.”

“For the hopeful can draw strength from the most ridiculous sources of power—a slogan, a word, a button. No faith is potent unless it is also faith in the future; unless it has a millennial component. So, too, an elective doctrine: as well as being a source of power, it must also claim to be a key to the book of the future.”

“Those who would transform a nation or the world cannot do so by breeding and captaining discontent or by demonstrating the reasonableness and desirability of the intended changes or by coercing people into a new way of life. They must know how to kindle and fan an extravagant hope.”

“The abjectly poor also are without faith in the future. The future seems to them a booby trap buried on the road ahead. To change things is to ask for trouble.”

“Faith in a holy cause is to a considerable extent a substitute for the lost faith in ourselves.”

“It is rare for a mass movement to be wholly of one character. sometimes it is two or three movements in one. The exodus of the Hebrews from Egypt was a slave revolt, a religious movement and a nationalist movement. The militant nationalism of the Japanese is essentially religious. The French Revolution was a new religion. It had “its dogma, the sacred principles of the Revolution—Liberté at sainte égalité. It had its form of worship, an adaptation of Catholic ceremonial, which was elaborated in connection with civic fêtes. It had its saints, the heroes and martyrs of liberty.” 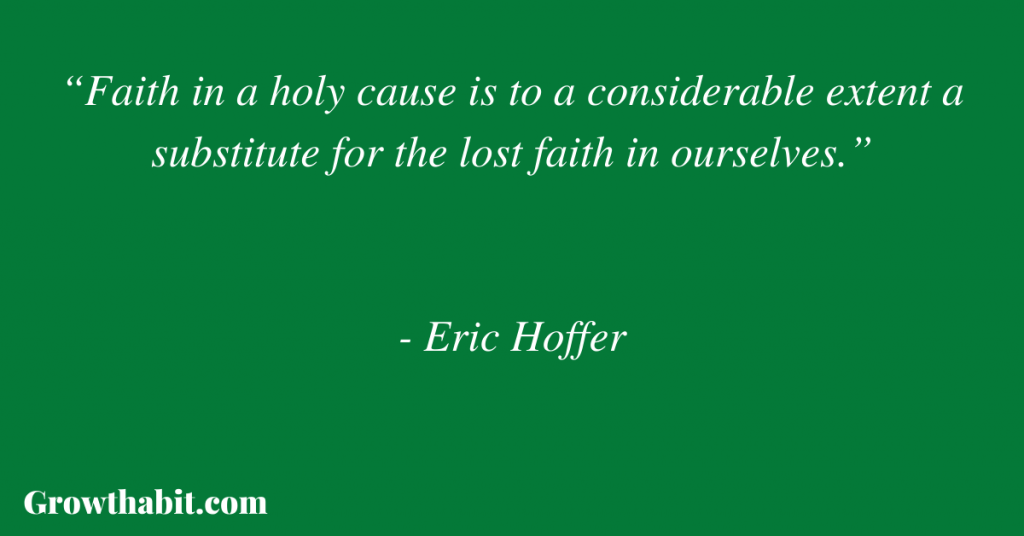 The inert mass of a nation, for instance, is in its middle section. The decent, average people who do the nation’s work in cities and on the land are worked upon and shaped by minorities at both ends—the best and the worst.”

“If they clamor for freedom, it is but freedom to establish equality and uniformity. The passion for equality is partly a passion for anonymity: to be one thread of the many which make up a tunic; one thread not distinguishable from the others. No one can then point us out, measure us against others.” 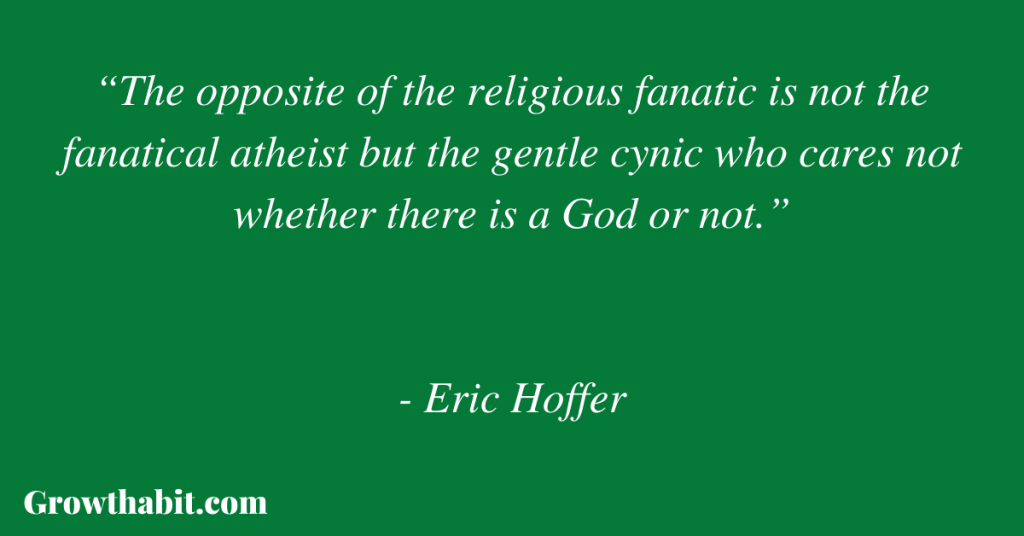 “They who clamor loudest for freedom are often the ones least likely to be happy in a free society. The frustrated, oppressed by their shortcomings, blame their failure on existing restraints. Actually their innermost desire is for an end to the “free for all.” They want to eliminate free competition and the ruthless testing to which the individual is continually subjected in a free society.”

“When asked who he is, his automatic response is that he is a German, a Russian, a Japanese, a Christian, a Moslem, a member of a certain tribe or family.”

“The same Russians who cringe and crawl before Stalin’s secret police displayed unsurpassed courage when facing—singly or in a group—the invading Nazis. The reason for this contrasting

behavior is not that Stalin’s police are more ruthless than Hitler’s armies, but that when facing Stalin’s police the Russian feels a mere individual while, when facing the Germans, he saw himself a member of a mighty race, possessed of a glorious past and even more glorious future.” 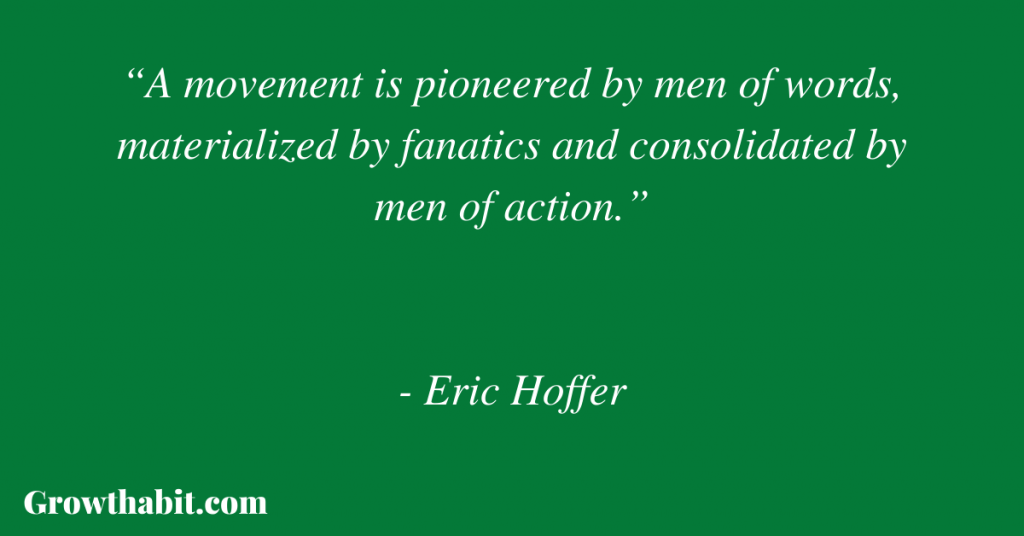 “All mass movements deprecate the present by depicting it as a mean preliminary to a glorious future; a mere doormat on the threshold of the millennium. To a religious movement the present is a place of exile, a vale of tears leading to the heavenly kingdom; to a social revolution it is a mean way station on the road to Utopia; to a nationalist movement it is an ignoble episode preceding the final triumph.”

“One of the rules that emerges from a consideration of the factors that promote self-sacrifice is that we are less ready to die for what we have or are than for what we wish to have and to be. It is a perplexing and unpleasant truth that when men already have “something worth fighting for,”  they do not feel like fighting. People who live full, worthwhile lives are not usually ready to die for their own interests nor for their country nor for a holy cause. Craving, not having, is the mother of a reckless giving of oneself.”

“The devout are always urged to seek the absolute truth with their hearts and not their minds. “It is the heart which is conscious of God, not the reason.”

“The opposite of the religious fanatic is not the fanatical atheist but the gentle cynic who cares not whether there is a God or not.”

“It is essential to have a tangible enemy, not merely an abstract one.”

“There is a guilty conscience behind every brazen word and act and behind every manifestation of self-righteousness.”

“The most effective way to silence our guilty conscience is to convince ourselves and others that those we have sinned against are indeed depraved creatures, deserving every punishment, even extermination. We cannot pity those we have wronged, nor can we be indifferent toward them. We must hate and persecute them or else leave the door open to self contempt.”

“Thus, though hatred is a convenient instrument for mobilizing a community for defense, it does not, in the long run, come cheap. We pay for it by losing all or many of the values we have set out to defend.”

“There is also this: when we renounce the self and become part of a compact whole, we not only renounce personal advantage but are also rid of personal responsibility. There is no telling to what extremes of cruelty and ruthlessness a man will go when he is freed from the fears, hesitations, doubts and the vague stirrings of decency that go with individual judgment” 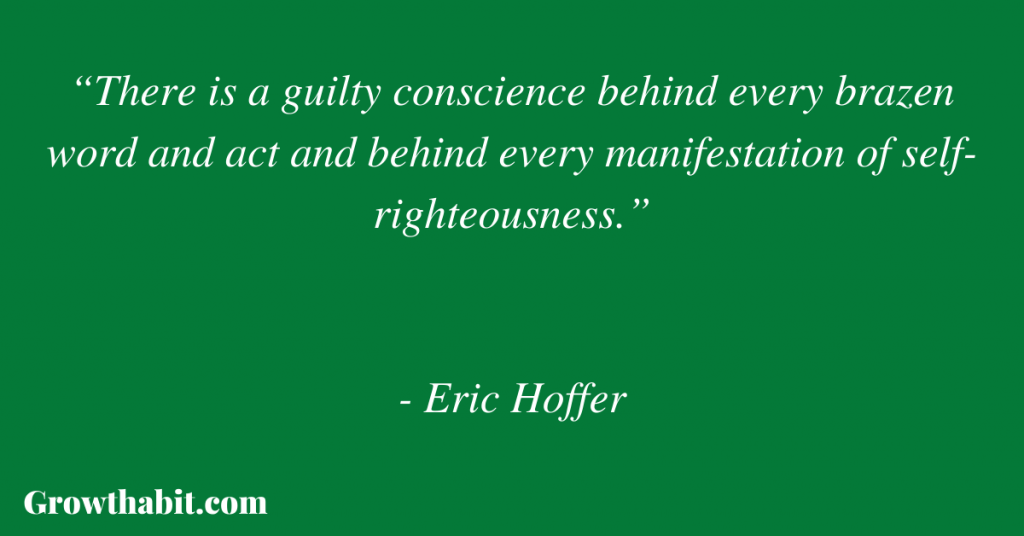 “order has been discredited and has lost the allegiance of the masses. familiarizing the masses with the idea of change, and of creating a receptivity to a new faith, can be done only by men who are, first and foremost, talkers or writers and are recognized as such by all.”

“For the majority of people cannot endure the barrenness and futility of their lives unless they have some ardent dedication, or some passionate pursuit in which they can lose themselves.

“A movement is pioneered by men of words, materialized by fanatics and consolidated by men of action.”

“The genuine man of action is not a man of faith but a man of law.”

Hoffer wrote True Believer in the 1950s’ and the book still holds merit today. When you read some of the sentences in the book, you understand that it perfectly depicts tribal actions, movements, and groups of today.

Hoffer really has a lot of golden nuggets in this book and I’ve used them defensively. Defensively, it means that I recognized when other people tried to manipulate me to do something and I  successfully managed to evade it… This book can be quite problematic if it falls into the wrong hands…

There’s a great quote by Hoffer that says, “You can discover what your enemy fears most by observing the means he uses to frighten you.” Take this into consideration when you think about your fears- it’s usually your subconscious mind that uses its own fear to frighten you. That should be a starting point for you to take back the reigns.