The simplest way to explain it would be to say it’s about structuring life for liberty and the pursuit of entrepreneurship. But this book is so much more— it’s a guide on how to live the best possible life by leveraging the right type of entrepreneurship to achieve freedom, acquire time, and gain liberty.

This section explains in detail what the 9-5 Script is, how it affects not only your everyday operations, but also the way you think about work and life.

This is how the SCRIPT makes you a MODEL citizen:

M)EDIOCRE: Life has regressed into an unremarkable yet comfortable ordinariness, where thriving is not an objective, but surviving.
(O)BEDIENT: Free-thinking is dead; you follow popular opinion and trust your government and the news organizations fanning the flames of your biases.
(D)EPENDENT: You’re a debt-serf owned by an army of corporations: product and service producers, Wall Street, government—or worse, you are owned by time.
(E)NTERTAINED: Your entertained and humored mind distracts the heart to the point where your soul is no longer heard.
(L)IFELESS: Dead at twenty-five but not buried until seventy-five. Goals, nonexistent. Optimism, scant. Dreams, murdered.

This section starts to lead us into solutions for the problem. This section shows you what is possible if you manage to free yourself from the cultural indoctrination which rules the game.

This section is the largest one in the book and it provides the blueprint of UNSCRIPTED entrepreneurship. This framework helps you establish a business that isn’t a replacement for a 9-5 job, but a way to change your life forever.

The previous sections were about getting to the top. This section is about staying at the top and never having to work again in your life. The section provides ways how you can easily multiply your money once you set up and benefit from the UNSCRIPTED entrepreneurial framework.

Two miles and twenty minutes less from my life, I wonder, Is a sheep who drives a Mercedes to the slaughterhouse still a sheep?

…,a servitude system where you become an instrument, not of inspiration or aspiration but of perspiration and desperation.

Sunday evening is the litmus test for a SCRIPTED existence—how do you feel about the impending Monday? Excited? Or dour and cheerless?

Spend a fortune on a six-hour wedding, one that takes six years to pay off.

When it comes to SCRIPTSpeak from the SCRIPTED, ask yourself this: If I accept average advice from average people living average lives, can I expect to be anything but average? 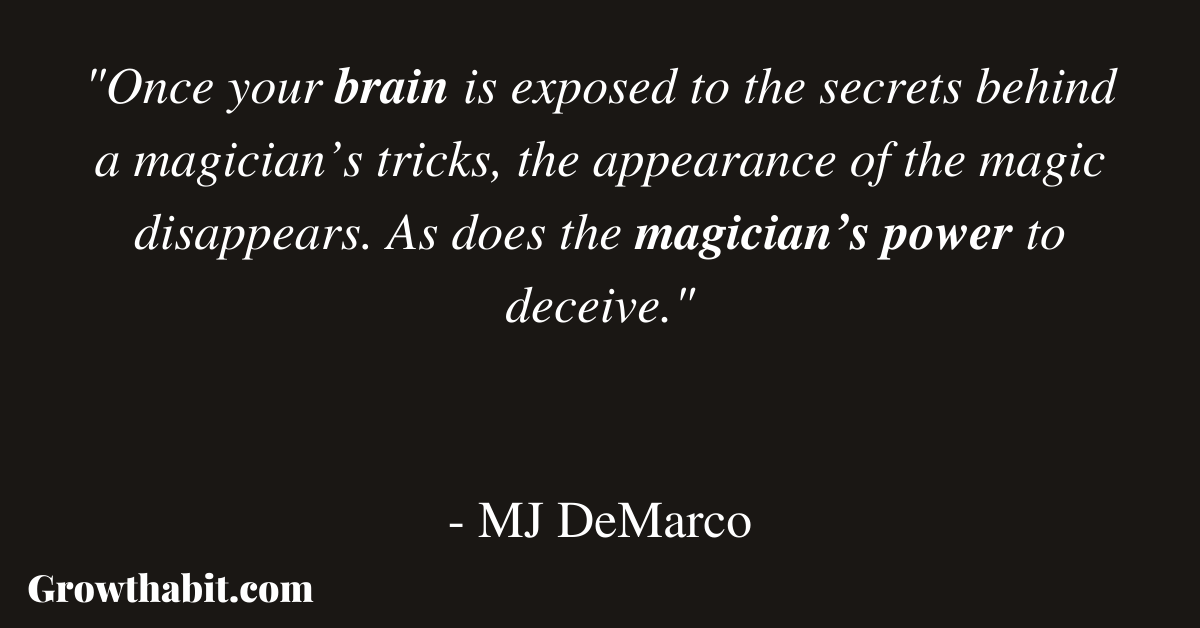 As a kid, you had fantastic dreams and unstoppable visions powering an optimistic future. You wanted to be the next DiCaprio, the next Hemingway, the next Jordan, the next Elvis, the next Picasso, the next great something—if not worldly, then locally, as a gourmet chef, a brave firefighter, or a respected policeman. Whatever your dreams, you acted on them on the playground, in books, or by Halloween costume. Dreams were alive and teeming with probability. And then something happened. You grew up.

You unwillingly become a SCRIPTED servant who is (M)ediocre, (O)bedient, (D)dependent, (E)ntertained, and (L)ifeless and who then becomes a seeder, a compromised party propagating the SCRIPTED OS.

The truth is, some parents would rather enjoy the prestige of having their kid be a miserable doctor ready to jump off a cliff over a happy human being.

Ahh, “good feelings of participation”—God knows life is filled with those, right? Merely “participate” at work and you get fired. How’s that for good feelings? Oh, and the “urge to win” or “out compete” someone who doesn’t give a shit? Surely that has no use in real life, eh? I wish I was making this up.

Noam Chomsky once said, “The smart way to keep people passive and obedient is to strictly limit the spectrum of acceptable opinion, but allow very lively debate within that spectrum.”

There’s no money in hard truths, but fantasy buys eyeballs; it buys votes; it buys stuff emulating the fantasy; and most importantly, it funnels money into the Wall Street casinos.

Once your brain is exposed to the secrets behind a magician’s tricks, the appearance of magic disappears. As does the magician’s power to deceive.

“hyperreality is seen as a condition in which what is real and what is fiction are seamlessly blended together so that there is no clear distinction between where one ends and the other begins.

temporal prostitution—the subordination of time to money; the presumption that time is unlimited and can be fecklessly traded, squandered, and dishonored, while money is piously coveted as a limited resource.

Yes, you are collared by hope, imprisoned by time, and owned by Wall Street.

A real FTE burns bridges and forces change; a fake one does not.

For example, another event-driven consequence evolving from shortcut thinking is what I call: “action-faking.” Action-faking (as opposed to “action-taking”) is when you take solitary and/or uncommitted action that is NOT a part of a bigger process. Instead, you’re acting not to imbue real change but to “feel good” by momentarily fooling yourself about progress. Action-faking can be many things, from trivial busywork to data research to reading books—none of which coax progress.

The real truth is hit when the poverty scam is polarized (and the money scam): Great value precedes great wealth. If you want to make millions, impact millions.

frugality scam—the belief that obsessive expense reduction, penny-pinching, and experiential deprivation will someday pay off in the opposite: rich life experiences, freedom, and abundance. The frugality scam is like chopping off your head and bragging you’ll never suffer migraines again.

Unscripted is the best book on entrepreneurship I ever read. It has everything you need to start a business and achieve autonomy. If you can choose to read only one book about entrepreneurship, it would be this one. And the non-bullshit approach paired with the beautiful language and personal anecdotes makes this book a page-turner as well!

MJ DeMarco’s books spawned a place where entrepreneurs regularly meet— The Fastlane Forum. It’s home to over 500,000 entrepreneurs and it’s the best place if you want to learn more about entrepreneurship.

I run a successful freelance writing business. But after reading UNSCRIPTED, I realized that there’s so much potential in using its entrepreneurial framework. Because of that, I, with the help of my friend, created Growthabit.

Think about what is action-faking in your life at the moment. And decide to do a single, small action that isn’t action-faking, but action-taking. Do one little thing in your entrepreneurial life that moves the needle.