What causes certain products, ideas, and behaviors to be talked about more? The book explains that it’s about six principles that make an idea, product, or behavior contagious: social currency, triggers, emotion, public, practical value, and stories.

Contagious talks about six principles that make an idea, product, or behavior contagious.

Top of mind, tip of tongue. Triggers serve as reminders for people to talk about our ideas and products. The more triggers (cues) you can insert into the everyday environment, the more people will talk about your product (like autumn and pumpkin lattes’). 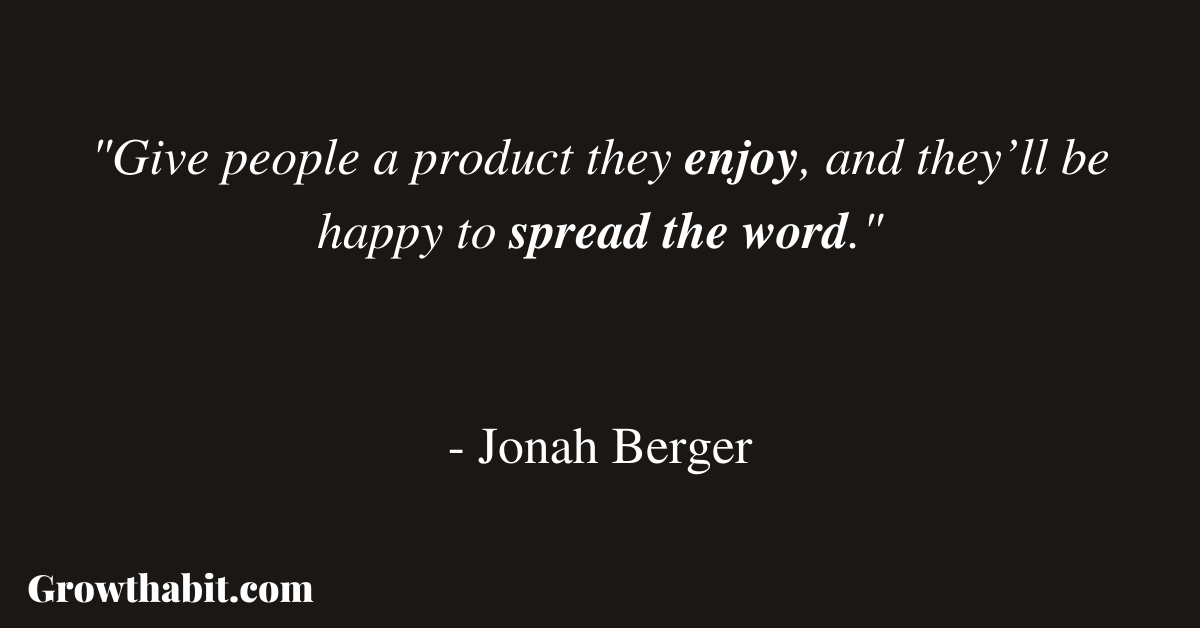 The old “monkey see, monkey do” works wonders here. People need to show in public that they’re doing/buying/supporting something so that others can see that. It’s hard to copy a behavior or buying pattern if you don’t know what it is. So you need to make your product or idea more public and visible. (Think about a donation to the charity that you make from home vs. the one you make at a stage at a concert for the same charity).

Your idea or product needs to be useful to people. It needs to either save money, save time, be more convenient or all of the above. And you need to package it in an easy-to-use, easy-to-share kind of way so it gets passed on. (Think about DIY videos).

People don’t just share information. They tell stories. And stories are perfect vehicles for carrying messages. So you should try to create a story out of your idea or product and make it so that when people share your story, they can’t help but to share your product or idea as well (Jared Fogle lost 250 pounds only eating Subway sandwiches).

These principles are the elements of virality, but it’s not a clear-cut formula for it. But if you manage to integrate all six principles into your products or ideas, it’s only a matter of time before you become viral with it.

Research by the Keller Fay Group finds that only 7 percent of word of mouth happens online.

Not only did Blendtec blenders demolish all these objects, but their video series, titled Will It Blend?, received more than 300 million views. Within two years the campaign increased retail blender sales by 700 percent. All from videos made for less than a few hundred dollars apiece. And for a product that seemed anything but word-of-mouth worthy. A regular, boring old blender.

Everything about Please Don’t Tell suggests that you’ve been let into a very special secret. You won’t find a sign posted on the street. You won’t find it advertised on billboards or in magazines. And the only entrance is through a semihidden phone booth inside a hot dog diner. And what could be more remarkable than watching two people disappear into the back of a phone booth?

Indeed, research finds that more than 40 percent of what people talk about is their personal experiences or personal relationships.

Real Fact # 27: A ball of glass will bounce higher than a ball of rubber.

Some people like to be the life of the party, but no one wants to be the death of it. We all want to be liked.

After all, what good is status if no one else knows you have it?

Many British supermarkets use a similarly intuitive labeling system. Just as with stoplights, they use red, yellow, or green circles to denote how much sugar, fat, and salt are in different products. Low-sodium sandwiches are marked with a green circle for salt while salty soups get a red circle. Anyone can immediately pick up on the system and understand how to behave as a result.

Scarcity and exclusivity help products catch on by making them seem more desirable. If something is difficult to obtain, people assume that it must be worth the effort.

Every day, the average American engages in more than sixteen word-of-mouth episodes, separate conversations where they say something positive or negative about an organization, brand, product, or service.

Give people a product they enjoy, and they’ll be happy to spread the word.

More than ten thousand more people voted in favor of the school funding initiative when the polling place was a school. Polling location had a dramatic impact on voting behavior.

Triggers and cues lead people to talk, choose, and use. Social currency gets people talking, but Triggers keep them talking. Top of mind means tip of tongue.

It turns out that science articles frequently chronicle innovations and discoveries that evoke a particular emotion in readers. That emotion? Awe.

And that is where emotion comes in. Rather than harping on features or facts, we need to focus on feelings; the underlying emotions that motivate people to action.

“The best results don’t show up in a search engine, they show up in people’s lives.”

Designing messages that make people anxious or disgusted (high arousal) rather than sad (low arousal) will boost transmission. Negative emotions, when used correctly, can be a powerful driver of discussion.

Making something more observable makes it easier to imitate. Thus a key factor in driving products to catch on is public visibility. If something is built to show, it’s built to grow.

Psychologists call this idea “social proof.” This is why baristas and bartenders seed the tip jar at the beginning of their shift by dropping in a handful of ones and maybe a five. If the tip jar is empty, their customers may assume that other people aren’t really tipping and decide not to tip much themselves either. But if the tip jar is already brimming with money, they assume that everyone must be tipping, and thus they should tip as well.

People assume that the longer the line, the better the food must be.

Approximately one out of every eight cars sold was because of social influence.

The Movember Foundation succeeded because they figured out how to make the private-public. They figured out how to take support for an abstract cause—something not typically observable—and make it something that everyone can see. For the thirty days of November people who sport a mustache effectively become walking, talking billboards for the cause.

It’s been said that when people are free to do as they please, they usually imitate one another. We look to others for information about what is right or good to do in a given situation, and this social proof shapes everything from the products we buy to the candidates we vote for.

Ken Craig is eighty-six years old. And the video that went viral? It’s about shucking corn.

When writer and editor William F. Buckley Jr. was asked which single book he would take with him to a desert island, his reply was straightforward: “A book on shipbuilding.”

So using the word “sale” beside a price increased sales even though the price itself stayed the same.

So while broadly relevant content could be shared more, content that is obviously relevant to a narrow audience may actually be more viral.

By encasing the lesson in a story, these early writers ensured that it would be passed along—and perhaps even be believed more wholeheartedly than if the lesson’s words were spoken simply and plainly. That’s because people don’t think in terms of information. They think in terms of narratives. But while people focus on the story itself, information comes along for the ride.

The Jared story is so entertaining that people bring it up even when they’re not talking about weight loss. The amount of weight he lost is impressive, but even more astonishing is the fact that he lost it eating Subway sandwiches. A guy loses 245 pounds eating fast food? The summary alone is enough to draw people in.

When trying to generate word of mouth, many people forget one important detail. They focus so much on getting people to talk that they ignore the part that really matters: what people are talking about.

Virality is most valuable when the brand or product benefit is integral to the story. When it’s woven so deeply into the narrative that people can’t tell the story without mentioning it.

So if we’re trying to make a product or idea contagious, think about how to build in these key STEPPS.

If you want your message heard, remembered, and be actioned-upon, then this is the right book for you. I know a couple of people who used this book to create viral articles which jump-started their career. They are not rules (2+2=4), but principles (2+2, will eventually, over time, lead to 4) so don’t be discouraged if it doesn’t work at first. But the book covers the basics of what you need to know to start creating viral articles, ideas, and products.

Here’s Jonah Berger holding a presentation at Microsoft about his book.

Contagious: Why Things Catch On

I’m a writer so it was imperative for me to learn the elements of variability of my content. Before I went full time into freelance writing, I used to teach storytelling around Europe to students so I was ingrained in the elements of virality even before reading the book.

But after I read it, I started structuring my articles so that they tick the “STEPPS” box.

Next time you talk (or write) about anything, describe the emotion fully. Don’t say “I was angry” Describe the anger by saying “ I clenched my fists, bit down hard, widened my eyes, and the hair on the back of my neck stood straight up!”