This is a book about regret, the horrendous feeling we get in our stomachs, that teaches us how to use its strengths as a force of good. Regret can help us make better decisions, perform better at work (or school), and bring greater meaning to our lives.

The Power of Regret has a total of 14 chapters, divided into three sections:

The chapters are the following:

1. The Life-Thwarting Nonsense of No Regrets

This chapter talks about the current atmosphere about negative emotion and especially regret. It’s a “non regret” culture and it’s plain wrong. The author mentions examples here such as Edith Piaf, Slash, and Amber Chase.

2. Why Regret Makes Us Human

This chapter talks about the research that proves to you that to be human is to regret things. Most people who don’t have regrets might be seriously ill, whereas the author mentions disorders such as Huntington’s disease.

3. At Leasts and If Onlys

4. Why Regret Makes Us Better

This chapter is all about the three benefits that we can get if we handle regret well: it can improve our decision-making skills, boost our performance, and it can provide a deeper meaning for our lives.

5. Regret on the Surface

This chapter talks about the (faulty) research on regret and what do people truly regret. As it turns out, people regret quite a lot of things spread equally among categories such as family, relationships, education, career, finance, and health.

This chapter explains the foundation regret in detail. Within it, it talks about the “foundation attribution error” which is a combination of externalities such as education, environment, and parenting, along with persona responsibility, that affects our foundation regrets.

This chapter explains the boldness regret in detail. Within it, it talks about the regret of people not being true to themselves and the sins of omission.

This chapter explains the moral regret in detail. Within it, it talks about how people regret not doing the right thing. The section talks about five regretted sins: harm, cheating, disloyalty, subversion, and desecration.

This chapter reverse-engineers the regret to figure out what we value the most and it comes to four things: stability, growth, goodness, and love. And they are about obligations that we didn’t meet or the opportunities we didn’t take (or a combination of both).

This chapter focuses on regret we have for doing an action. There are two ways to alleviate that pain: undoing what we have done or reframing it in our mind to find some silver lining (…at least we got this positive thing).

This chapter talks about three ways you can turn regret into a positive thing in your life: self-disclosure or sharing your regret, either with another person on paper; self-compassion or being compassionate to yourself since you will make mistakes, and self-distancing or seeing the problem from a neutral, fly-on-the-wall perspective.

This chapter talks about the pros and cons of anticipating regret. The pros are that it can help us prevent actions that would cause regret. But the cons are that we’re quite bad at predicting how much regret we would have from a certain action. We should optimize for regret, not completely avoid it because sometimes we need to take that risk.

The Life-Thwarting Nonsense of NoRegrets

“From every corner of the culture the message booms. Forget the past; seize the future. Bypass the bitter; savor the sweet. A good life has a singular focus (forward) and an unwavering valence (positive). Regret perturbs both. It is backward-looking and unpleasant—a toxin in the bloodstream of happiness.”

“This worldview makes intuitive sense. It seems right. It feels convincing. But it has one not insignificant flaw. It is dead wrong. What the anti-regret brigades are proposing is not a blueprint for a life well lived. What they are proposing is—forgive the terminology, but the next word is carefully chosen—bullshit.”

“This is a book about regret—the stomach-churning feeling that the present would be better and the future brighter if only you hadn’t chosen so poorly, decided so wrongly, or acted so stupidly in the past. Over the next thirteen chapters, I hope you’ll see regret in a fresh and more accurate light, and learn to enlist its shape-shifting powers as a force for good.”

“About one of every five people who get tattoos (presumably including people whose tattoos read “No Regrets”) eventually regret their decision, which is why the tattoo removal business is a $100 million-a-year industry in the United States alone.

“That’s because negative emotions are essential, too. They help us survive. Fear propels us out of a burning building and makes us step gingerly to avoid a snake. Disgust shields us from poisons and makes us recoil from bad behavior. Anger alerts us to threats and provocations from others and sharpens our sense of right and wrong. Too much negative emotion, of course, is debilitating. But too little is also destructive.

“The purpose of this book is to reclaim regret as an indispensable emotion —and to show you how to use its many strengths to make better decisions, perform better at work and school, and bring greater meaning to your life.”

Why Regret Makes Us Human

“If the precise definition feels elusive, the reason is revealing: regret is better understood less as a thing and more as a process.”

“We can visit the past and the future in our heads. And we can tell the story of something that never actually happened. Human beings are both seasoned time travelers and skilled fabulists.” 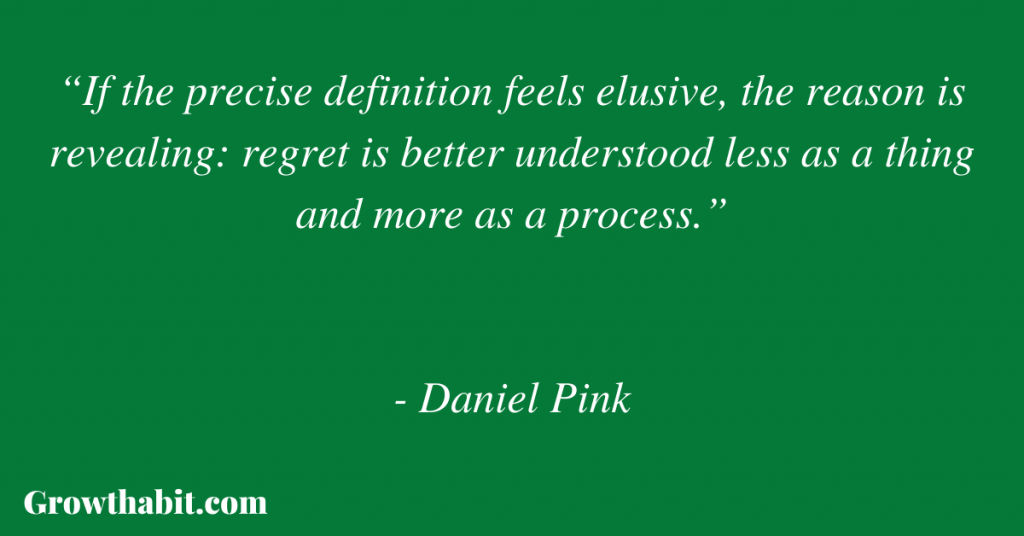 “Regret is a marker of a healthy, maturing mind.”

“In short, people without regrets aren’t paragons of psychological health. They are often people who are seriously ill.”

At Leasts and If Onlys

“At Leasts make us feel better.”

“If Onlys, by contrast, make us feel worse.

“Two decades of research on counterfactual thinking exposes an oddity: thoughts about the past that make us feel better are relatively rare, while thoughts that make us feel worse are exceedingly common. Are we all selfsabotaging masochists? No—or at least not all of us.”

Why Regret Makes Us Better

“Gillian Ku, now of London Business School, found that getting people to think about a previous escalation of commitment, and then to regret it, decreased their likelihood of making the error again.[1] Inducing this unpleasant feeling of If Only improved their future behavior.”

“We need the ability to regret our poor decisions—to feel bad about them—precisely so we can improve those decisions in the future.”

“This is one of the central findings on regret: it can deepen persistence, which almost always elevates performance.”

“The near miss likely prompted regret, which spurred reflection, which revised strategy, which improved performance.”

“For example, framing regret as a judgment of our underlying character—who we are—can be destructive. Framing it as an evaluation of a particular behavior in a particular situation —what we did—can be instructive.” 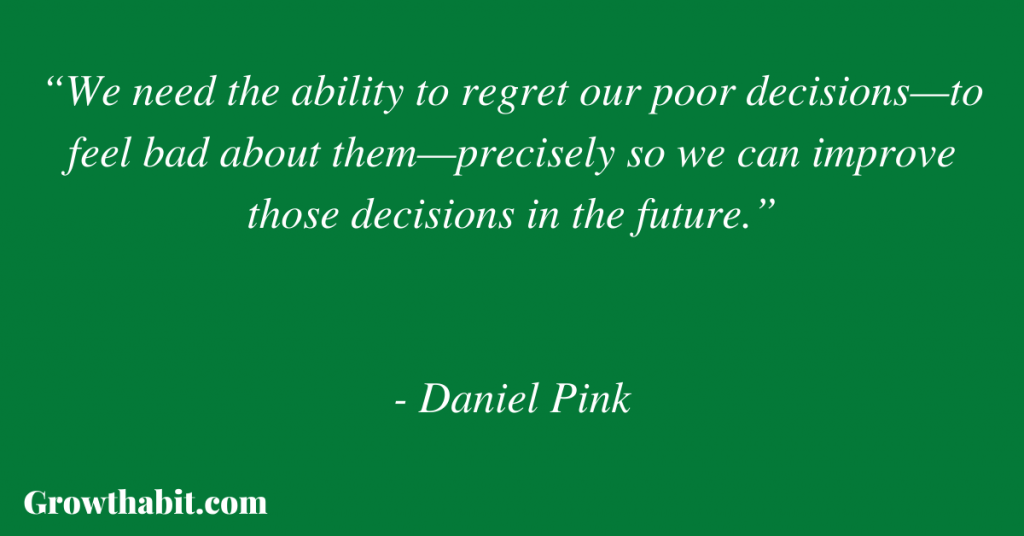 “When feeling is for thinking, and thinking is for doing, regret is for making us better.”

Regret on the Surface

“It took me a while to figure out, but I’ve discovered that regret, too, has both a surface structure and a deep structure. What’s visible and easy to describe—the realms of life such as family, education, and work—is far less significant than a hidden architecture of human motivation and aspiration that lies beneath it.”

“Foundation regrets arise from our failures of foresight and conscientiousness.”

“Remember that what distinguishes regret from disappointment is personal responsibility. Disappointments exist outside of your control.”

“Play it safe or take a chance? With boldness regrets, we choose to play it safe.”

“People often talk about regrets in terms of doors. Amy has a “closed door” regret. As she told me, the opportunity to restore her connection with Deepa is gone. Cheryl has an “open door” regret. The opportunity to reconnect with her college friend remains. Both types of regrets nag at us, but for different reasons. Closed door regrets distress us because we can’t do anything about them. Open door regrets bother us because we can, though it requires effort.”

“Rifts are more dramatic. But drifts are more common. Drifts can also be harder to mend. Rifts generate emotions like anger and jealousy, which are familiar and easier to identify and comprehend. Drifts involve emotions that are subtler and that can feel less legitimate.” 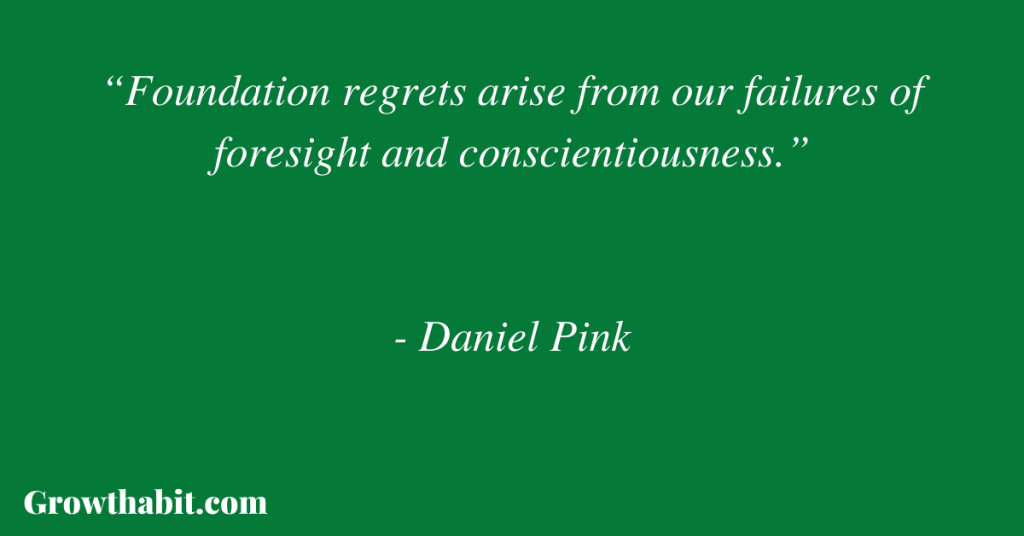 “George Vaillant, another Harvard psychiatrist, headed the Grant Study for more than thirty years. In an unpublished 2012 manuscript, he reflected on what he’d learned from the experience. After eight decades, hundreds of subjects, thousands of interviews, and millions of data points, he said he could summarize the conclusion of the longest-running examination of human flourishing in five words: “Happiness is love. Full stop.”

“We can undo many such regrets: we can make amends, reverse our choices, or erase the consequences.”

“Finding a silver lining doesn’t negate the existence of a cloud. But it does offer another perspective on that cloud.”

“It feels awkward, even shameful. But an enormous body of literature makes clear that disclosing our thoughts, feelings, and actions—by telling others or simply by writing about them— brings an array of physical, mental, and professional benefits.” 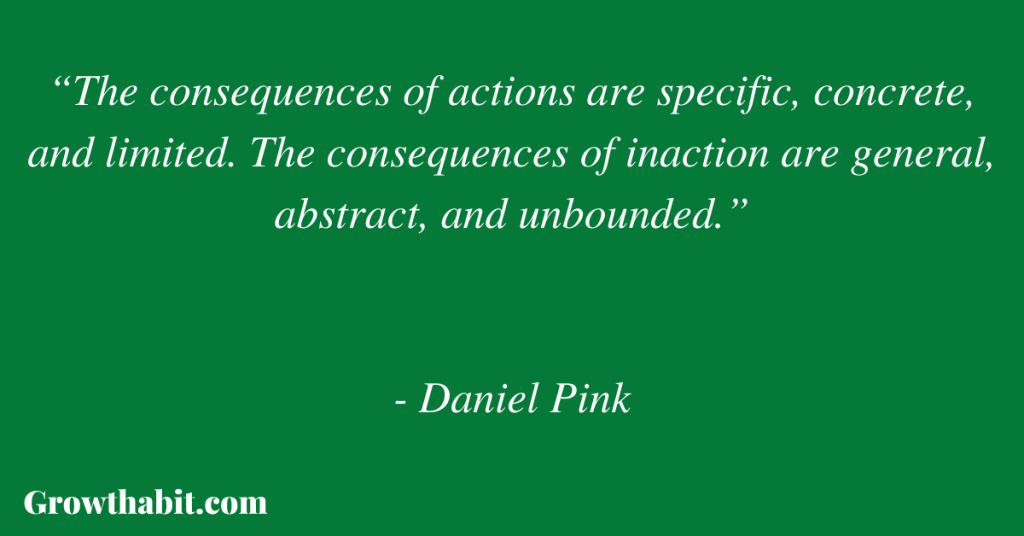 “Self-compassion begins by replacing searing judgment with basic kindness. It doesn’t ignore our screwups or neglect our weaknesses. It simply recognizes that “being imperfect, making mistakes, and encountering life difficulties is part of the shared human experience.”

“Regret is a retrospective emotion. It springs into being when we look backward. But we can also use it prospectively and proactively—to gaze into the future, predict what we will regret, and then reorient our behavior based on our forecast.”

“In the future, will I regret this decision if I don’t do X?” 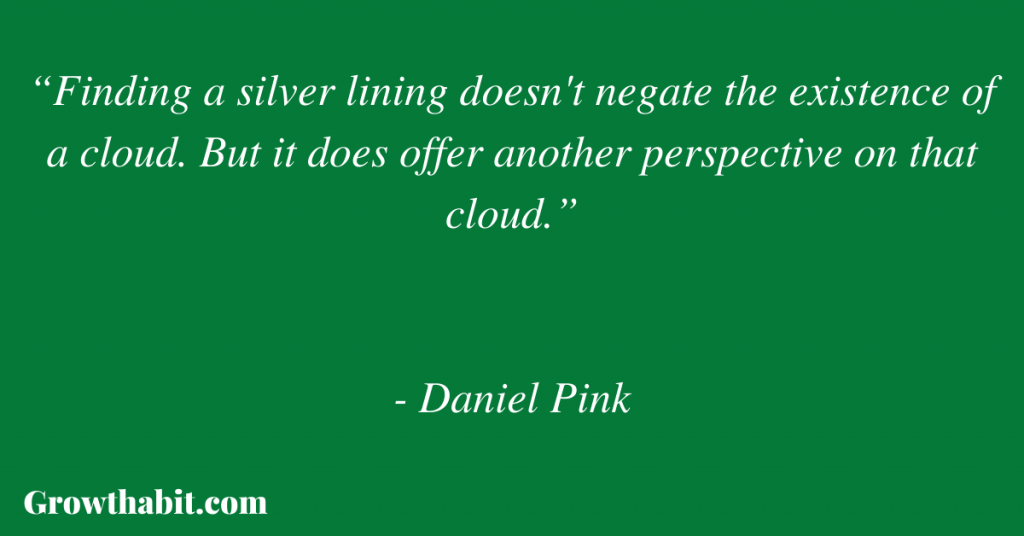 The new addition of Dan Pink makes us question the conventional phrase that having regrets is a bad thing. It’s quite a good book, with plenty of research to back up the points, and concise chapters that don’t drag for too long.

Write about your regret for 15 minutes a day for three days straight. If you want, you can read the writings to a person who you hold dear.