Trust Me, I’m Lying is divided into two sections: how blogs work (feeding the monster) and what blogs mean (when the monster attacks). Each section has twelve chapters each:

“But that’s a polite veneer to hide the harsh truth. I am, to put it bluntly, a media manipulator—I’m paid to deceive. My job is to lie to the media so they can lie to you. I cheat, bribe, and connive for bestselling authors and billion-dollar brands and abuse my understanding of the Internet to do it.”

“It’s why I found myself at 2:00 one morning, at a deserted intersection in Los Angeles, dressed in all black. In my hand I had tape and some obscene stickers made at Kinko’s earlier in the afternoon. What was I doing here? I was there to deface billboards, specifically billboards I had designed and paid for. Not that I’d expected to do anything like this, but there I was, doing it. My girlfriend, coaxed into being my accomplice, was behind the wheel of the getaway car.” 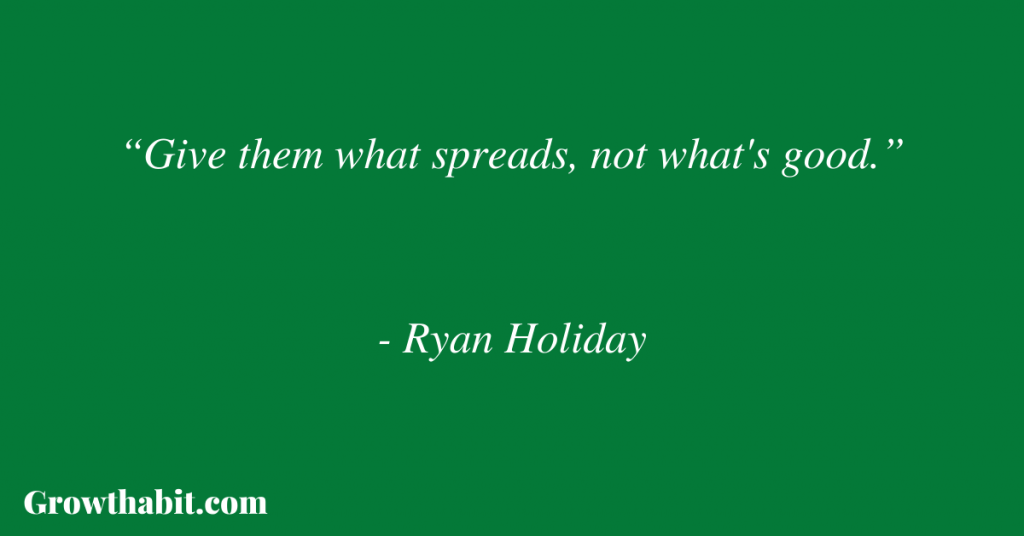 “The story of the monster is a lot like my story. Except my story is not about drugs or the yellow press but of a bigger and much more modern monster—my monster is the brave new world of new media—one that I often fed and thought I controlled.”

BOOK ONE – FEEDING THE MONSTER – HOW BLOGS WORK

“Legacy media outlets are critical turning points in building up momentum. The reality is that the bloggers at Forbes.com or the Chicago Tribune do not operate on the same editorial guidelines as their print counterparts. However, their final output can be made to look like they carry the same weight. If you get a blog on Wired.com to mention your startup, you can smack “‘A revolutionary device’—Wired” on the box of your product just as surely as you could if Wired had put your CEO on the cover of the magazine.”

“Once you get a story like this started it takes on a life of its own. That’s what happened after I vandalized Tucker’s billboards. Exactly one week later, inspired by my example, sixteen feminists gathered in New York City late at night to vandalize I Hope They Serve Beer in Hell posters all over Manhattan.Their campaign got even more coverage than my stunt, including a 650-word, three- picture story on a Village Voice blog with dozens of comments (I posted some comments under fake names to get people riled up, but looking at them now I can’t tell which ones are fake and which are real). From the fake came real action.”

“GIVE THEM WHAT SPREADS, NOT WHAT’S GOOD”

“Regardless of the topic, the more an article makes someone feel good or bad, the more likely it is to make the Most Emailed list. No marketer is ever going to push something with the stink of reasonableness, complexity, or mixed emotions. Yet information is rarely clearly good or bad. It tends to have elements of both, or none of either. It just is.”

“That’s where I come in. I make up the news; blogs make up the headline. Although it seems easy, headline writing is an incredibly difficult task. The editor has to reduce an entire story down to just a few units of text—turning a few hundred or thousand-word piece into just a few words, period. In the process it must express the article’s central ideas in an exciting way.”

“I’ll meet them on their terms, but their story will be filled with my terms. They won’t take the time or show the interest to check with anyone else.”

“THE WORLD IS BORING, BUT THE NEWS IS EXCITING. It’s a paradox of modern life. Journalists and bloggers are not magicians, but if you consider the material they’ve got to work with and the final product they crank out day in and day out, you must give them some credit. Shit becomes sugar.”

“A dubious accusation on a gossip blog nearly became a frighteningly nongossip story from the “most trusted name in news.” There had been no overt manipulation, yet something completely untrue had spread from one site to another as though some invisible hand had guided it along. Thankfully, it did not make it to air on CNN, but it could have had I not stepped in.”

“When Jarvis and others breathlessly advocate for new concepts they do not understand, it is both comical and dangerous. The web gurus try to tell us that this distributed, crowd-sourced version of fact-checking and research is more accurate, because it involves more people. But I side with Descartes and have more faith in a scientific approach, in which every man is responsible for his own work—in which everyone is questioning the work of everyone else, and this motivates them to be extra careful and honest.”

”Getting it right is expensive, getting it first is cheap.” And by extension, since it doesn’t cost him anything to be wrong, he presumably doesn’t bother trying to avoid it. It’s not just less costly; it makes more money, because every time a blog has to correct itself, it gets another post out of it—more pageviews.*”

“The pressure to “get something up” is inherently at odds with the desire to “get things right.”

“Iterative journalism makes the news cheap to produce but expensive to read.”

“The reality is that while the Internet allows content to be written iteratively, the audience does not read or consume it iteratively. Each member usually sees what he or she sees a single time—a snapshot of the process—and makes his or her conclusions from that.”

“Once published and its significance recognized, what was news becomes history.” Journalism can never truly be iterative, because as soon as it is read it becomes fact—in this case, poor and often inaccurate fact.”

“There is a reason that the weak are drawn to snark while the strong simply say what they mean.”

“From here we get the defining feature of our world today: a blurred line between what is real and what is fake; what actually happens and what is staged; and, finally, between the important and the trivial.”

When you hear a friend say in conversation “I was reading that …” know that today the sad fact is that they probably just glanced at something on a blog.”

“Our facts aren’t fact, they are opinions dressed up like facts. Our opinions aren’t opinions; they are emotions that feel like opinions. Our information isn’t information; it’s just hastily assembled symbols.”

CONCLUSION SO…WHERE TO FROM HERE?

“When intelligent people read, they ask themselves a simple question: What do I plan to do with this information? Most readers have abandoned even pretending to consider this. I imagine it’s because they’re afraid of the answer: There isn’t a thing we can do with it. There is no practical purpose in our lives for most of what blogs produce other than distraction. When readers decide to start demanding quality over quantity, the economics of Internet content will change. Manipulation and marketing will immediately become more difficult.” 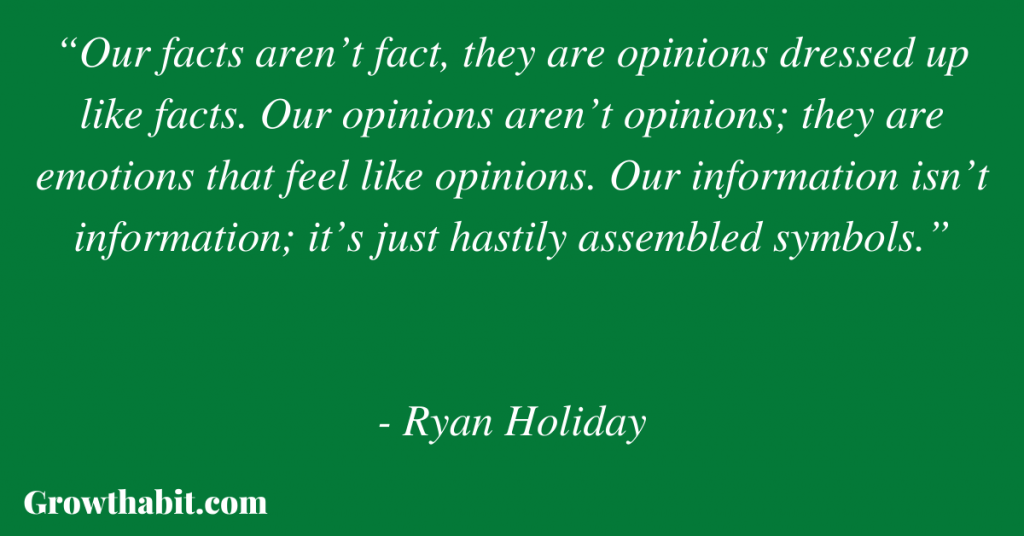 This is really a harrowing tale of media can destroy lives in instances and how easy it is to manipulate the media. It doesn’t matter what’s true, it matters what spreads. It’s a great book to pick up to learn how the media operates even though some things changed in today’s blogging sphere.

Here’s Ryan Holiday talking about his book on a podcast:
Chase Jarvis Podcast

For the love of God, check the sources and make sure that something is true before clicking that Share button.