Shoe Dog is the autobiography of Phil Knight, the founder of Nike. The story follows Knight from starting Nike (Blue Ribbon Sports at the start) all the way up to the 2010s’. Knight reveals stories about his personal life, his first group of employees, and his relationship with his mentor Bill Bowerman.

Shoe Dog has a four-part structure: Dawn, Part One, Part Two, and Night. The book follows Phil Knight during the process of starting, building, and scaling the company Nike.

Each part has subheadings titled by the year of when the story is happening.

“Earned a master’s from a top business school—Stanford. Survived a yearlong hitch in the U.S. Army—Fort Lewis and Fort Eustis. My résumé said I was a learned, accomplished soldier, a twenty-four-year-old man in full . . . So why, I wondered, why do I still feel like a kid?”

“At twenty-four I did have a Crazy Idea, and somehow, despite being dizzy with existential angst, and fears about the future, and doubts about myself, as all young men and women in their mid twenties are, I did decide that the world is made up of crazy ideas. History is one long processional of crazy ideas. The things I loved most—books, sports, democracy, free ​enterprise—started as crazy ideas.”

“The last thing I wanted was to pack up and return to Oregon. But I couldn’t see traveling around the world alone, either. Go home, a faint inner voice told me. Get a normal job. Be a normal person. Then I heard another faint voice, equally emphatic. No, don’t go home. Keep going. Don’t stop.”

“All is vanity, says the Bible. All is now, says Zen. All is dust, says the desert.”

“…goddess Athena, thought to be the bringer of “nike,” or victory. Temple of Nike, in which the warrior gives the king a gift—a pair of new shoes. I don’t know when I figured out that the play was called Knights.”

“Bowerman might say: “Nice race.” (In fact, that’s precisely what he said to one of his milers after the young man became one of the very first to crack the mythical four-minute mark in the United States.)”

I’d been unable to sell encyclopedias, and I’d despised it to boot. I’d been slightly better at selling mutual funds, but I’d felt dead inside. So why was selling shoes so different? Because, I realized, it wasn’t selling. I believed in running. I believed that if people got out and ran a few miles every day, the world would be a better place, and I believed these shoes were better to run in. People, sensing my belief, wanted some of that belief for themselves. 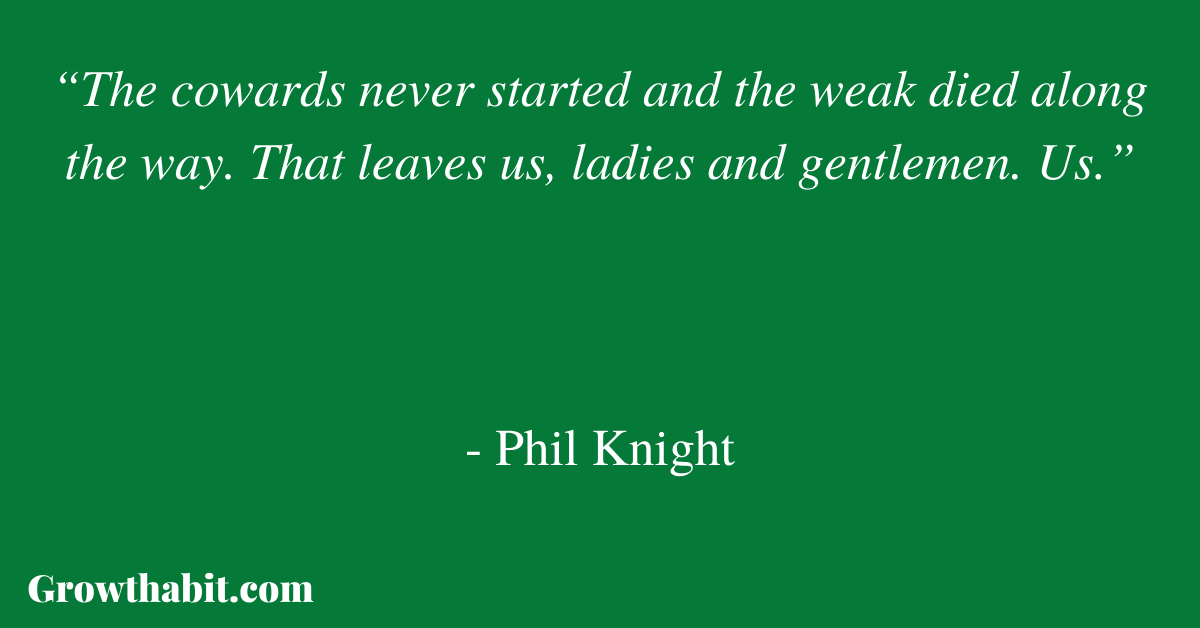 “By the tail end of 1967 Bowerman was inspiring many people besides me. That book he’d been talking about, that silly book about jogging, was done, and out in bookstores. A slight one hundred pages, Jogging preached the gospel of physical exercise to a nation that had seldom heard that sermon before, a nation that was collectively lolling on the couch, and somehow the book caught fire. It sold a million copies, sparked a movement, changed the very meaning of the word “running.” Before long, thanks to Bowerman and his book, running was no longer just for weirdos. It was no longer a cult. It was almost—cool?”

“That is, his lips were moving. But I couldn’t hear. Life’s ajoy? Here’s a toy? Are you Roy? He said it again: It’s a boy. “A—a—boy? Really?” “Your wife did a superb job,” he was saying, “she did not complain once, and she pushed at all the right times.

“We couldn’t make enough. Retailers and sales reps were on their knees, pleading for all the waffle trainers we could ship. The soaring pair counts were transforming our company, not to mention the industry. We were seeing numbers that redefined our long-term goals, because they gave us something we’d always lacked—an identity. More than a brand, Nike was now becoming a household word, to such an extent that we would have to change the company name. Blue Ribbon, we decided, had run its course. We would have to incorporate as Nike, Inc.”

These were the founding fathers of a multimillion dollar company that sold athletic shoes? A paralyzed guy, two morbidly obese guys, a chain-smoking guy? It was bracing to realize that, in this group, the one with whom I had the most in common was . . . Johnson. And yet, it was undeniable. While everyone else was laughing, rioting, he’d be the sane one, sitting quietly in the middle of the table reading a book.”

“By this time next week Bowerman would be worth $9 million. Cale—$6.6 million. Woodell, Johnson, Hayes, Strasser—each about $6 million. Fantasy numbers. Numbers that meant nothing. I never knew that numbers could mean so much, and so little, at the same time. “Bed?” Penny said.”

“Because I honestly wished I could do it all over again. I fell asleep for a few hours. When I woke it was cold and rainy. I went to the window. The trees were dripping water. Everything was mist and fog. The world was the same as it had been the day before, as it had always been. Nothing had changed, least of all me. And yet I was worth $178 million. I showered, ate breakfast, drove to work. I was at my desk before anyone else.”

“After forty years I’ve stepped down as Nike CEO, leaving the company in good hands, I think, and good shape, I trust. Sales last year, 2006, were $16 billion. (Adidas was $10 billion, but who’s counting?) Our shoes and clothes are in five thousand stores worldwide, and we have ten thousand employees. Our Chinese operation in Shanghai alone has seven hundred. (And China, our second-largest market, is now our largest producer of shoes. I guess that 1980 trip paid off.)”

“I set down the phone, my mouth hanging open. They’re all like sons, and brothers—family. No less. When Tiger’s father, Earl, dies, the church in Kansas holds fewer than one hundred, and I’m honored to be included. When Jordan’s father is murdered, I fly to North Carolina for the funeral and discover with a shock that a seat is reserved for me in the front row. All of which leads me back, of course, to Matthew.” 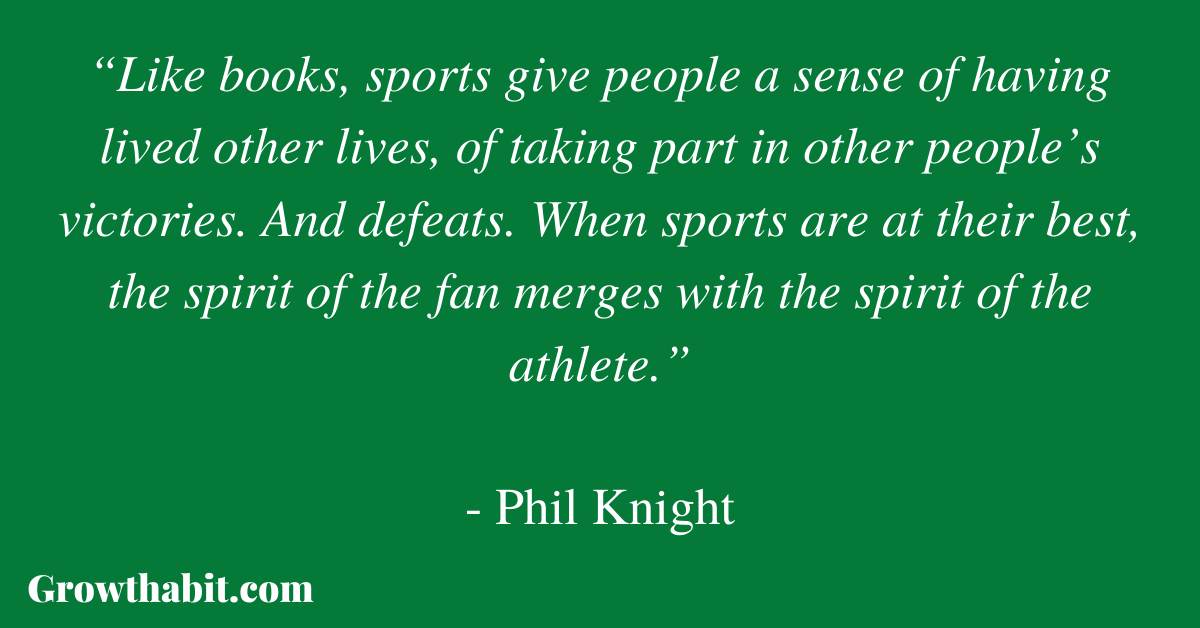 “In his quest to find himself, he dropped out of college. He experimented, dabbled, rebelled, argued, ran away. Nothing worked. Then, at last, in 2000, he seemed to enjoy being a husband, a father, a philanthropist. He got involved in Mi Casa, Su Casa, a charity building an orphanage in El Salvador. On one of his visits there, after a few days of hard, satisfying work, he took a break. He drove with two friends to Ilopango, a deep-water lake, to go scuba diving. For some reason he decided to see how deep he could go. He decided to take a risk that even his risk-addicted father would never take. Something went wrong. At 150 feet my son lost consciousness. If I were to think about Matthew in his final moments, fighting for air, I believe my imagination could get me very close to how he must have felt. After the thousands of miles I’ve logged as a runner, I know that feeling of fighting for that next breath. But I won’t let my imagination go there, ever.”

“And those who urge entrepreneurs to never give up? Charlatans. Sometimes you have to give up. Sometimes knowing when to give up, when to try something else, is genius. Giving up doesn’t mean stopping. Don’t ever stop.”

This book received a lot of praise, but I’m not sure why. To be honest, I felt bored for most of the book and, for me, it wasn’t that good. Yes, the journey involved a lot of details and stories that happened to Knight along the way, but again, the book didn’t it for me.

Shoe Dog provides a detailed way of how Knight started Nike and all the problems, backstabs, and challenges along the way. The one thing I learned and implemented from this book is to never give up control of your business. The first ten years of business were riddled with problems with his supplier from Japan and that caused a massive dependence which stressed out Knight. With Growthabit, I try to keep everything significant within my control so I can be independent and autonomous.

The next time you get an offer to sell something, stop and think about what you’re losing by doing it. Usually, people want to buy your time or your asset. Be wary of selling any of those two and try to remain in control.