Unshakeable by Tony Robbins is a book that teaches us about investing in the market. The author has interviewed one of the best investors in the world such as Warren Buffet, Ray Dalio, Jack Bogle, Carl Icahn, and many others to learn what it takes to succeed in the market.

Unshakeable is divided into three sections and they have nine chapters in total:

Each of the sections covers a different skill set that you need to successfully invest in the market and get rich from it.

UNSHAKEABLE Power and Peace of Mind in a World of Uncertainty.

This chapter is about becoming unshakeable no matter what’s happening around you. That’s how the bigger investors stayed level-headed even though they were dealing with billions of dollars during market meltdowns.

WINTER IS COMING . . . BUT WHEN? These Seven Facts Will Free You from the Fear of Corrections and Crashes.

This chapter is about attaining freedom through the compounding effect and you need to be aware of seven facts that happen over and over in the market:

HIDDEN FEES AND HALF- TRUTHS How Wall Street Fools You into Overpaying for Underperformance.

This chapter is about insane fees people pay to brokers and Wall Street even though their performance is poor or even negative (and almost never as good as the market/index return).

RESCUING OUR RETIREMENT PLANS What Your 401(k) Provider Doesn’t Want You to Know.

This chapter is about the insane fees people are charged for when it comes to 401(k) retirement plans. It’s not the companies fault–they receive only a couple of funds where they can invest the plans and the fees for those plans are high.

WHO CAN YOU REALLY TRUST? Pulling Back the Curtain on the Tricks of the Trade.

THE CORE FOUR Four Principles That Can Help Guide Every Investment Decision You Make.

This chapter is about the core four principles:

SLAY THE BEAR How to Navigate Crashes and Corrections to Accelerate Your Financial Freedom.

This chapter is about preparing for the bear market and being ready to invest “the dip.” The markets usually rise around 50-80% in the following 12 months of the bear market, providing you with massive returns.

SILENCING THE ENEMY WITHIN The Six Biggest Mistakes Investors Make and How to Avoid Them.

This chapter is about dealing with your psychology and avoiding the six biggest mistakes:

REAL WEALTH Making the Most Important Decision of Your Life.

This chapter is about determining that real wealth is psychological, emotional, and spiritual. It’s about living a better life, not just having a lot of money. And for that, start investing and remember that it’s a marathon, not a sprint.

“HEDGE FUNDS VS. MUTUAL FUNDS VS. INDEX FUNDS For those unfamiliar, a hedge fund is a private fund available only to high-net-worth investors. The managers have complete flexibility to bet on both directions of the market (up or down). They charge hefty management fees (typically 2%) and share in the profits (typically 20% of profits go to the manager). A mutual fund is a public fund available to anyone. In most cases, they are actively managed by a team who assembles a portfolio of stocks, bonds, or other assets and continually trades their holdings in hopes to beat the “market.” An index fund is also a public fund but requires no “active” managers. The fund simply owns all the stocks in the index (for example, they would own all 500 stocks in the S&P 500 index).”

“The first fact you need to know is that there were 34 bear markets in the 115 years between 1900 and 2015. In other words, on average, they happened nearly once every three years.” 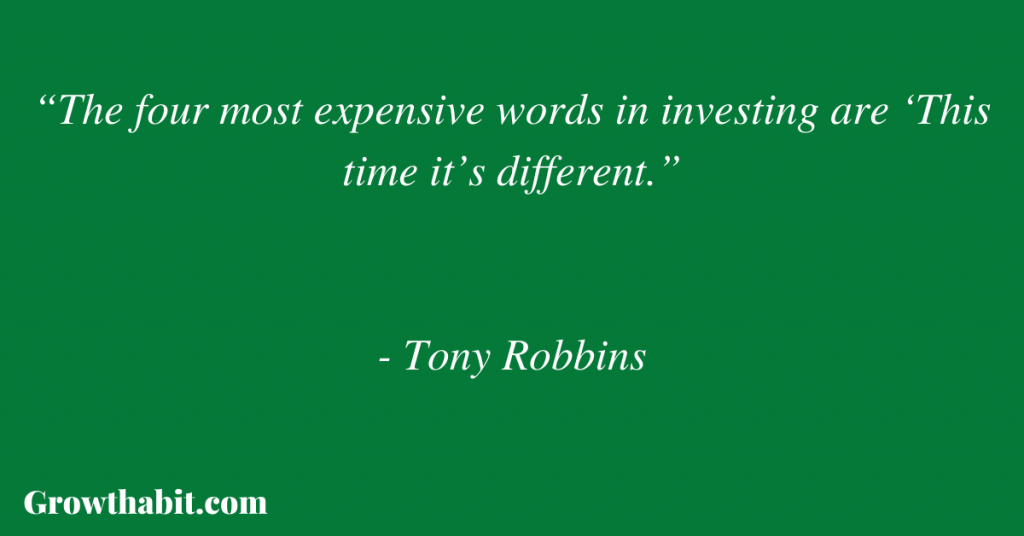 “The stock market is a device for transferring money from the impatient to the patient. —WARREN BUFFETT”

“Index funds take a “passive” approach that eliminates almost all trading activity. Instead of trading in and out of the market, they simply buy and hold every stock in an index such as the S&P 500!”

“In another landmark study, researchers Richard Bauer and Julie Dahlquist examined more than a million market timing sequences from 1926 to 1999. Their conclusion: just holding the market (via an index fund) outperformed more than 80% of market-timing strategies.”

“Warren Buffett, who has outpaced the market by a huge margin, also advises regular people to invest in index funds, so they can avoid the drain of excessive fees. To prove his point that almost all active managers underperform index funds over the long run, he made a $1 million bet in 2008 with a New York Based firm called Protégé Partners. He challenged Protégé to select five top hedge fund managers who could collectively beat the S&P 500 over a 10-year period. So what happened? After 8 years, Fortune reported that these hedge funds were up only 21.87%, versus 65.67% for the S&P 500! The race isn’t over yet. But as it stands, these active managers look like contestants in a three-legged race trying to catch Usain Bolt, the world’s fastest man.”

“If Paul makes five investments, each for $1 million, and four in a row go to zero, then he’s lost a total of $4 million. But if the fifth investment is a home run and makes $5 million, he’s earned back his entire $5 million investment. In reality, Paul’s hit rate is a whole lot better than that! Imagine that only two of his five investments pan out as expected and go up fivefold. That means his original $5 million has just grown to $10 million. In other words, he’s doubled his money despite, in this case, being wrong 60% of the time!”

“Buffett did just that in late 2008, investing in fallen giants such as Goldman Sachs and General Electric, which were selling at once-in-a-lifetime valuations. Better still, he structured these investments in ways that reduced his risk even further. For example, he invested $5 billion in a special class of “preferred” shares of Goldman Sachs, which guaranteed him a dividend of 10% a year while he waited for the stock price to recover! Most people get so scared during crashes that they see only the downside. But Buffett made sure that it was almost impossible for him to lose. In other words, it’s all about asymmetric risk/reward!”

“I have enough money to retire and live comfortably for the rest of my life. The problem is, I have to die next week. —ANONYMOUS” 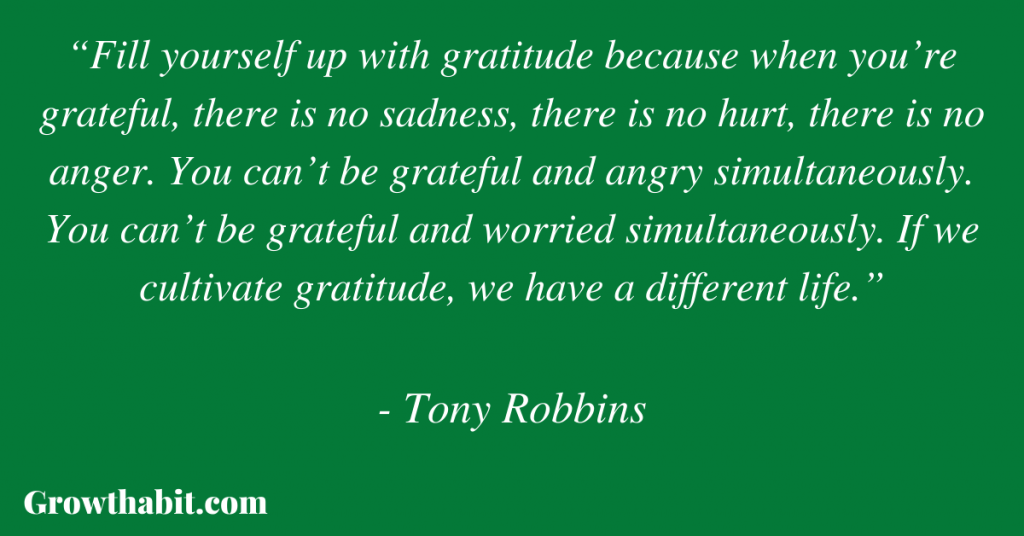 “David told me how individual investors can diversify by owning low-cost index funds that invest in six “really important” asset classes: US stocks, international stocks, emerging-market stocks, real estate investment trusts (REITs), long-term US Treasuries, and Treasury inflation-protected securities (TIPS). He even shared the precise percentages that he would recommend allocating to each.”

”The four most expensive words in investing are ‘This time it’s different.”

“The best investors know that the gloom never lasts. For example, Templeton made his first fortune by investing in dirt-cheap US stocks during the dark days of World War II. He later explained that he liked to invest at “the point of maximum pessimism,” when bargains were everywhere. Likewise, Warren Buffett invested aggressively in 1974 when markets were slammed by the Arab oil embargo and Watergate. While others were filled with despair, he was exuberantly bullish, telling Forbes: “Now is the time to invest and get rich.”

“How did this work out? Well, after bottoming out in March 2009, the S&P 500 shot up by 69.5% in just 12 months. Over 5 years, the index rose 178%, vindicating our belief that bear markets are the ultimate gift for opportunistic investors with a long-term perspective. As I write this, the market has risen 266% since the 2009 low.”

Section 3 – The Psychology Of Wealth

“But I have to ask . . . What could mess this up? I’ll give you a clue: it’s nothing external. It’s you! That’s right. The single biggest threat to your financial well-being is your own brain.”

“The key is to actively seek out qualified opinions that differ from your own. Of course, you don’t want just anyone with a different opinion, but rather someone who has the skill, track record, and intelligence to give another educated perspective. All opinions are not created equal.”

“invest in a portfolio of low-cost index funds, and then hold them through thick and thin.”

“By diversifying internationally, you’re not only reducing your overall risk but also increasing your returns. Remember when we talked about the “lost decade” of 2000 through 2009, when the S&P 500 produced an annualized return of only 1.4% a year, including dividends? During that time, international stocks averaged 3.9% a year, while emerging-market stocks returned 16.2% a year. So, for investors who diversified globally, those lost years were just a minor bump in the road.”

“To make matters worse, the psychologists Daniel Kahneman and Amos Tversky also demonstrated that financial losses cause people twice as much pain as the pleasure they receive from financial gains. The term used to describe this mental phenomenon is “loss aversion.”

“Real wealth is emotional, psychological, and spiritual. If you’re financially free, but you’re still suffering emotionally, then what kind of victory is that?”

“Our lives are shaped not by our conditions, but by our decisions.”

“To put this another way, will you commit to enjoying life not only when everything goes your way but also when everything goes against you, when injustice happens, when someone screws you over, when you lose something or someone you love, or when nobody seems to understand or appreciate you? Unless we make this definitive decision to stop suffering and live in a beautiful state, our survival minds will create suffering whenever our desires, expectations, or preferences are not met. What a waste of so much of our lives!”

This was quite a good book about investing, where Robbins talked with the biggest investors out there to figure out what they do differently. And for most of them, it’s psychological, not technical. It’s about going for the long run, investing in index funds, keeping a steady position, and buying more when the bear market hits.

Here’s Tony Robbins talking about his book in an interview:
BUILD series

I have an investment fund, but it’s not going to the market, it’s being funneled into Growthabit. So the money I would put on index funds is going into this website, the social media help, buying books, and doing everything I can to build this business.

I’m hoping to earn enough money from it so that I can buy stocks during the next bear market and receive those big returns.

Start investing in your future by getting in the market!