It’s like the person picking up everything to go grocery shopping only to forget that they left the kid alone back in the house. The answer to the complexity in a multitude of fields is a checklist.

We have accumulated stupendous know-how. We have put it in the hands of some of the most highly trained, highly skilled, and hardworking people in our society.

Knowledge has both saved us and burdened us.

But with the checklist in hand, the pilots went on to fly the Model 299 a total of 1.8 million miles without one accident.

In complex processes, after all, certain steps don’t always matter. Perhaps the elevator controls on airplanes are usually unlocked and a check is pointless most of the time. Perhaps measuring all four vital signs uncovers a worrisome issue in only one out of fifty patients. “This has never been a problem before,” people say. Until one day it is.

These steps are no-brainers; they have been known and taught for years. So it seemed silly to make a checklist for something so obvious. Still, Pronovost asked the nurses in his ICU to observe the doctors for a month as they put lines into patients and record how often they carried out each step. In more than a third of patients, they skipped at least one.

The results were so dramatic that they weren’t sure whether to believe them: the ten-day line-infection rate went from 11 percent to zero. So they followed patients for fifteen more months. Only two line infections occurred during the entire period.

In the Keystone Initiative’s first eighteen months, the hospitals saved an estimated $175 million in costs and more than fifteen hundred lives. The successes have been sustained for several years now—all because of a stupid little checklist.

No, the real lesson is that under conditions of true complexity—where the knowledge required exceeds that of any individual and unpredictability reigns—efforts to dictate every step from the center will fail. People need room to act and adapt. Yet they cannot succeed as isolated individuals, either—that is anarchy. Instead, they require a seemingly contradictory mix of freedom and expectation—expectation to coordinate, for example, and also to measure progress toward common goals.

You make the creamed corn a few hundred times and you believe you have it down. But that’s when things begin to slip, Adams said.

There are good checklists and bad, Boorman explained. Bad checklists are vague and imprecise. They are too long; they are hard to use; they are impractical. They are made by desk jockeys with no awareness of the situations in which they are to be deployed. 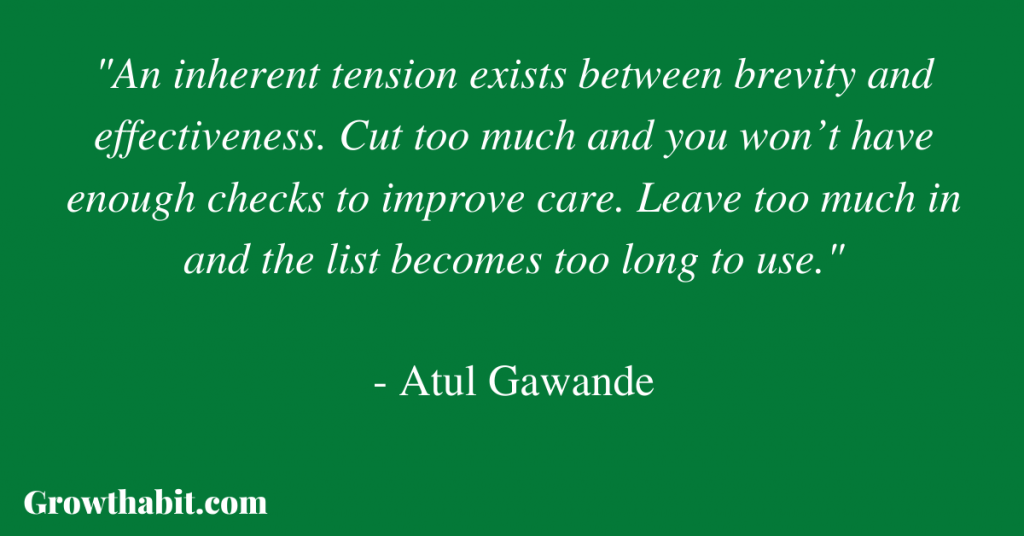 They do not try to spell out everything—a checklist cannot fly a plane. Instead, they provide reminders of only the most critical and important steps—the ones that even the highly skilled professionals using them could miss.

The checklist cannot be lengthy. A rule of thumb some use is to keep it to between five and nine items, which is the limit of working memory.

The reason is more often that the necessary knowledge has not been translated into a simple, usable, and systematic form.

An inherent tension exists between brevity and effectiveness. Cut too much and you won’t have enough checks to improve care. Leave too much in and the list becomes too long to use.

The final results showed that the rate of major complications for surgical patients in all eight hospitals fell by 36 percent after the introduction of the checklist. Deaths fell 47 percent.

THE HERO IN THE AGE OF CHECKLISTS

The checklist doesn’t tell him what to do, he explained. It is not a formula. But the checklist helps him be as smart as possible every step of the way, ensuring that he’s got the critical information he needs when he needs it, that he’s systematic about decision making, that he’s talked to everyone he should.

It somehow feels beneath us to use a checklist, an embarrassment. It runs counter to deeply held beliefs about how the truly great among us—those we aspire to be—handle situations of high stakes and complexity. The truly great are daring. They improvise. They do not have protocols and checklists. Maybe our idea of heroism needs updating.

The fear people have about the idea of adherence to protocol is rigidity. They imagine mindless automatons, heads down in a checklist, incapable of looking out their windshield and coping with the real world in front of them. But what you find, when a checklist is well made, is exactly the opposite. The checklist gets the dumb stuff out of the way, the routines your brain shouldn’t have to occupy itself with (Are the elevator controls set? Did the patient get her antibiotics on time? Did the managers sell all their shares? Is everyone on the same page here?), and lets it rise above to focus on the hard stuff (Where should we land?).

This is one of those “easy to do, but also easy not to do” things in life. A checklist doesn’t sound like anything remarkable. But you would be surprised how helpful and effective this self-help tool really is! Heck, anything I write here (or elsewhere for the matter of fact) is backed up by a checklist.

It’s just impossible to consistently deliver high standards in anything you do without a checklist. The only reason why I give this book a 7/10 is its length. I believe the point could have been made in less than 200 pages.

I have a checklist for a lot of different things in my life. This was just one example of it.

Create a checklist with less than 10 items for something you are constantly doing in your life and share it with me in the comment section!